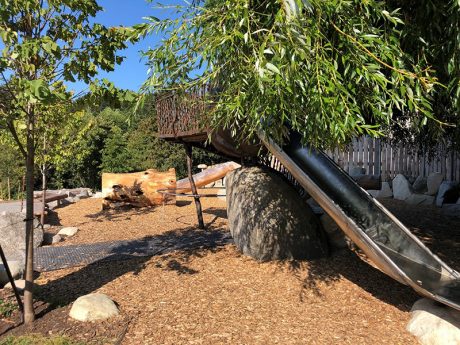 A new playground will be dedicated to residents and visiting children noon Saturday, Aug. 14 at the Village Green on Orcas Island.

The Playground-on-the-Green is a product of Orcas Island’s imagination, energy and funding, and was constructed by Orcas artists Chuck Greening and Zackarya Leck.

The playground design, by Greenworks of Portland, Oregon, mimics what kids might find in the woods or on the beach — rocks to climb, logs to scramble, sand to mold —  and features a  sculptural slide, designed and constructed by Zackarya Leck.  The nature-based design encourages kids to build confidence in assessing risk and supports their coordination, orientation, and social skills.