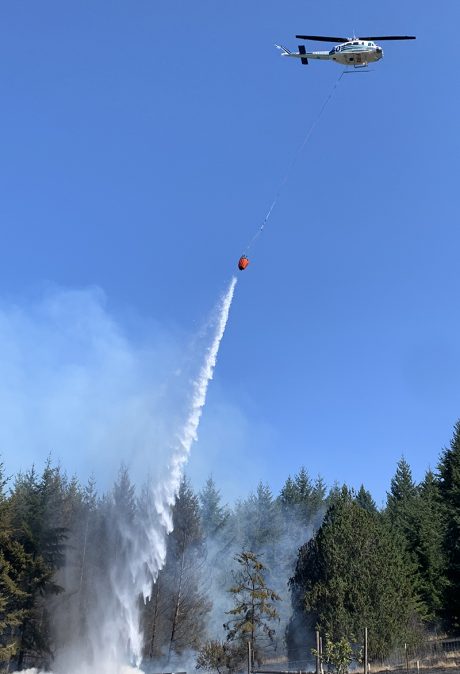 No one was injured, but two small outbuildings were damaged by Thursday’s fire.

Crews received a report of a wildfire near West Side Road and Pleasant Valley Road around 2:15 p.m., Thursday, according to San Juan Island Fire & Rescue. When crews arrived, the fire extended north and east across a field and into trees.

Two Washington State Department of Natural Resources helicopters were called to drop water over hotspots. San Juan Fire & Rescue said they were grateful for the assistance.

“DNR’s deployment of firefighting assets to our region at Lake Biggs for rapid wildfire response is a huge help for all of us in the San Juan Islands,” the department said in a press release.

The department reports the “fire appears to have started as a result of routine yard work” and warned residents of the dry conditions.

“Please be extra careful of all you do during this drier than normal summer,” a spokesperson for the department said. “We are all in this together and we all need to be vigilant, and alert to prevent fires.”

San Juan County issued a “complete burn ban” Friday until further notice, according to a press release. Campfires are not allowed, but propane barbecues are permitted.

Saturday, the San Juan Island National Historical Park issued restrictions for its two sites, American Camp and English Camp, “due to very dry conditions and increasing fire danger on San Juan Island,” according to a press release. Wood, charcoal or propane campfires or grills are not permitted in the park sites, as well as candles, tiki torches and incense burners, according to the release.