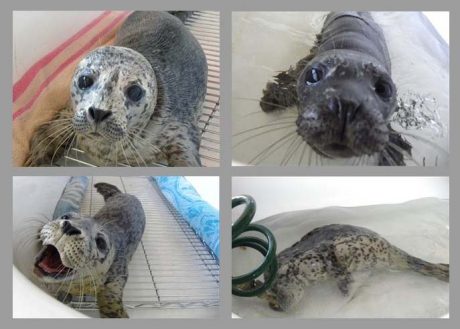 The first Harbor Seal pup of the year was brought to Wolf Hollow on June 24. She had been seen hanging around anchored boats near Sucia Island for 2 days, trying to suckle on boats and climb onto swim steps. San Juan County Marine Mammal Stranding Network brought her to Wolf Hollow.

Usually, the peak of seal pupping season around the San Juan’s is early July so we expected more pups to be brought in at any time. But none came. By mid-July the first pup was swimming in a pool and eating fish, but we still hadn’t received any others. Very strange.

Then, on July 21st that all changed. The local marine mammal stranding network brought in 3 pups in one day, from different parts of the county. The first pup came from Jones Island, the second was in the marina at Roche Harbor on San Juan Island and the third came from Johns Island. They were all less than a week old, had been alone on shore for some time, were thin, dehydrated and had small wounds, so now they are in our seal nursery/intensive care area and are gradually recovering.

It seems that seal pupping season is later this year, so who knows how many more pups will need our care in the next few weeks.

From fish to electricity, when seal pups come into care, our costs increase greatly. With donations down by 50%, your donation is needed now more than ever. Please donate today. Thank you!

YOU save wildlife when you donate!