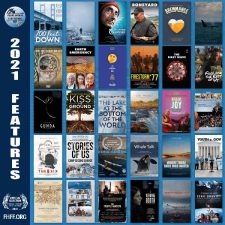 Dateline: Friday Harbor, WA Friday Harbor Film Festival’s online FILM GUIDE, detailing the 30+ feature films and 30+ short films to be shown at the Livestream/Online Festival on October 14-24, is now available at FHFF.org.  Students have submitted 10+ films that will also be screened.

In the FILM GUIDE, click on a poster to access full details and filmmaker information. Trailers provide a glimpse of what’s to come in the full show. While browsing you can star those films you most want to watch during the festival. All-Access and 5-ticket passes are available now at FHFF.org/passes. Single tickets will be available beginning October 15.

Feature and short films are categorized by theme – Explorers and Adventures, Things to Consider, and Tales from the Heart. Winning films, both feature and short, will be honored in these categories at the Audience Choice Awards at the Awards Webinar on October 24.

It’s time to mark your calendar, choose your favorites in the FILM GUIDE, and purchase your pass for the Friday Harbor Film Festival October 14-24.  Don’t miss it!