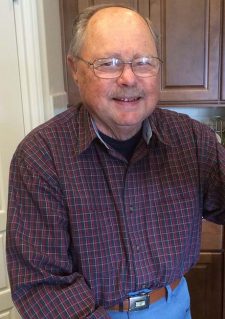 Hugh was born in Modesto, CA on 7/14/1926 to Hubert F. Stanley and Lois P. Stanley. After he graduated from Berkeley High School he joined the U.S. Navy Reserve and served on a destroyer in the Pacific Theater of World War II. He then attended Modesto Jr. College, the University of California at Berkeley, BA, and Oregon State University MA and PhD, where he met and married Marjory Miller in 1959. They had three sons: Mark (deceased), Paul and William. Hugh also had 4 grandchildren, Christopher, Jessica, Nicholas and Ella, and 2 great-grandchildren, Makayla and Beckham.

Hugh enjoyed 25 years of teaching university courses and working with graduate students. He retired from Utah State University in Logan, Utah in 1990 and moved to San Juan Island, WA where he had done research at the University of Washington Marine Laboratories previously.

In his retirement Hugh returned to a former activity he loved – art. He enjoyed painting landscapes of island scenes in watercolors and other media. He was very active in the Sunshine Gallery Co-op of artists in Friday Harbor for many years. He loved books and libraries and volunteered in several roles at the San Juan Island Library. He loved classical music and operas as well and enjoyed live performances particularly.