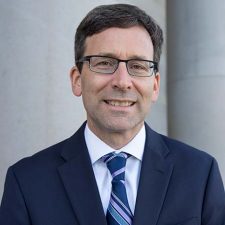 Washington state attorney general Bob Ferguson spoke at the December meeting of the League of Women Voters on Monday about the great variety of issues currently being confronted by his office.

Speaking to the group on Zoom, he called his office “the largest law firm in the state,” and said they represent every state agency. He said his office doesn’t make policy: “We give advice, they decide.”

The office recently confronted election integrity in the case of Loren Culp, a losing candidate for governor, who after his loss filed a series of lawsuits against the state. Attorneys have an ethical obligation not to file frivolous lawsuits, and after the AG’s office challenged Culp on those grounds he withdrew his suits “with prejudice,” meaning he can never file them again.

Ferguson also said, “We filed a suit against the postmaster general, joined by other states, for failing to deliver our November 2020 ballots in a timely manner, and we won.” It was “a huge case for election integrity.”

A current priority in the office is “litigation against corporations that we believe fueled the opioid crisis…. Other states signed on to a settlement granting a lifetime legal shield to the Sackler-Purdue family, which we believe the judge didn’t have the authority to do,” so Washington is still pursuing the case in court.

Ferguson then said he would respond to questions:

Susan Martin thanked him “for the leadership you took against the previous administration’s immigration policies,” and he responded, “Yes, there is no Muslim ban, and the Dreamers are still here…. Many of our suits are still ongoing; there are still dozens of cases…. Just recently we won a case against GEO Corporation which was paying immigrants in custody one dollar a day for janitorial work while they were being held.” The corporation was ordered to pay millions in back pay.

In relation to school violence, Pati Otley asked what legislation relating to firearms he might be submitting to the legislature, and he said, “This year we’re proposing bans on the sale of assault weapons and high-capacity magazines…. I am confident if these came to a vote they would pass.” — the problem is getting the legislature to bring such proposals to a vote.

Gay Graham asked, “What is the state of Washington doing for indigenous women” (facing violence) “and what are you planning to do?” He replied, “We’re leading a task force on that,” (the Washington State Missing and Murdered Indigenous Women and People (MMIW/P Task Force). “We can’t pass legislation on our own, but we can make suggestions to the legislature. We’re just getting started.” He added that “there is a lot of information on that on our web site.”

Superintendent of schools Fred Wood asked what to expect regarding the various Covid-related mandates ordered by the governor, including masks, many of which have been challenged in court, and Ferguson responded, “Our work is to defend any state law. Since the pandemic began the governor has issued many, many orders, and we have won every case (defending them).”

Michael Martin asked a question about consumer protection against ransomware and “Do you have enough resources and legal horsepower for those kinds of cases?” He responded, “Yes. A few years ago we had only nine attorneys in that field, but we have increased our resources significantly and we now have over 30 attorneys in it. My goal is to have the largest consumer protection division in the country, some funded by the legislature and some funded internally.”