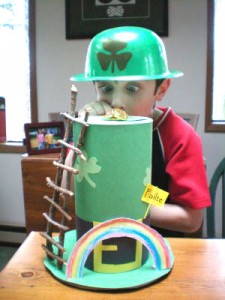 Cathy Cole told me they tried:

This weekend, Liam constructed a Leprechaun Trap for his 2nd grade class. He and his classmates put the traps out yesterday in hopes that they would catch themselves some lucky leprechauns on St. Patrick’s Day. In the past, the only evidence in Ms. Evan’s classroom were little leprechaun footprints on the special day. Liam hopes that a leprechaun will climb the ladder onto the top of the hat to get the gold and will fall through the top into the pile of cotton inside. His sign, “Failte” is Gaelic for “Welcome.” Between the sign, the rainbow and the gold, we think there is enough to attract a lucky leprechaun.

There was terrific evidence of leprechaun activity. Our classroom was a
disaster with desks misplaced, traps “tripped” (they were too smart to
get caught, unfortunately), and it was clear they exited through the
window. The students’ desks were out in the hall, and my desk was even
messed up with their little green footprints on the kids’ report cards!
They also swiped my rocking chair, and I just found it down the hall.

What a mess, and what fun!