Taking tourism on the road….

The Visitors’ Bureau here in the islands is pretty active when it comes to spreading the word….last week they were in Olympia visiting with our newly-minted state senator Kevin. Here’s more from Robin:

On March 9, Deborah Hopkins and Robin Jacobson of the San Juan Islands Visitors Bureau, as well as Carol and Bogdan Kulminski of the Blue Heron B&B on Orcas Island, represented the San Juan Islands during “Tourism Day” in Olympia, with more than 250 tourism industry professionals from around the state.

They took part in the “Why Tourism Matters” rally on the Capitol steps, met with District 40 legislators Senator Kevin Ranker, Representative Jeff Morris and Representative Dave Quall, then enjoyed a reception at the Governor’s Mansion.  Governor Chris Gregoire spoke at the reception, with enthusiastic support of the tourism industry, which is Washington’s 4th largest industry (following software, aerospace and agriculture/food/wine). 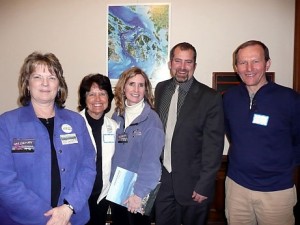 The news release below contains further information, followed by the list of media coverage received so far.  The day was coordinated by the Washington State Destination Marketing Association and Seattle’s Convention & Visitors Bureau.

OLYMPIA, WASH. – Today more than 250 tourism industry professionals from Tacoma, Spokane, Bellingham, Yakima, Vancouver, Seattle and many other communities across Washington will converge on the state capitol to tell legislators Why Tourism Matters.

An industry rally and press conference will be held on the state capitol’s north steps at 1:30 p.m. by a coalition of convention and visitor bureaus, chambers of commerce and other destination marketing organizations from across the state.

The effort inaugurates the statewide roll-out of the Why Tourism Matters public outreach and advocacy campaign which will convey the importance of tourism by way of advertising, online content, public relations and cooperative communications.

The campaign website at www.whytourismmatters.com will go live today at 1:30 p.m., featuring the latest tourism statistics for the state and many communities, industry news and links to national initiatives. Much of the web site is dedicated to profiles of local tourism industry professionals, or “tourism ambassadors,” who work on the frontlines and serve as the industry’s face of tourism.

These tourism ambassadors will attend today’s event in Olympia. Other participants – many clad in work-day uniforms and costumes – represent the spectrum of the tourism industry: from hotel managers and housekeeping attendants to restaurateurs and servers, tour leaders, travel agents, convention center presidents, vintners, artists, bell captains, tour boat captains and at least one cabaret performer.

Following the rally, the statewide tourism industry contingent will call on state legislators to ask for their support in two areas of concern: maintaining current funding levels for the 2009-2011 state tourism office budget; and support of SB 5875 and SHB  2297 which call for funding to study expansion options for the Washington State Convention & Trade Center.

Today’s state initiatives coincide with national news, including current tourism industry efforts to counterbalance the harmful political rhetoric and sensationalism that is influencing the unnecessary cancellation of corporate meetings and events across the U.S.

The U.S. Association of America ranks $740 billion travel and tourism industry fifth in nation among 20 major private industry sectors. The industry directly employees 7.5 million people, generates payroll of $178 billion and tax revenues of about $110 billion. Visitors to the U.S. spent more here than U.S. residents traveling abroad, creating a positive balance of trade of $8.3 billion for the national economy.

++++++++++++++++
To learn more about why tourism matters to Washington State, visit www.whytourismmatters.com.

Here’s what we know so far on the news front.  More is coming in and we’ll send an update in a day or two. –David Blandford, Seattle CVB