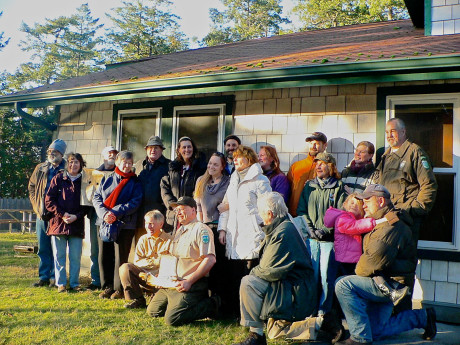 How do you maintain a world-class public park without any tax support? It’s not easy.

Lime Kiln Point State Park, also known as Whale Watch Park, is one of the few places in the world where you can watch whales up close from shore. It was also the site of a limestone mining operation for 90 years, and it has a beautiful lighthouse that has been operating since 1919. It draws some 200,000 visitors a year, from at least 40 countries.

The 36-acre site is surrounded by the 174-acre Land Bank Limekiln Preserve, and walking trails on the two properties link up seamlessly.

It is one of our island treasures.

But two years ago the legislature voted not to fund state parks out of the general fund and instead to ask the public to support them through parking fees — the so-called Discover Pass, which sells for $30 a year or $10 a day.

Surprisingly (or not) this new funding mechanism hasn’t raised enough cash, and state parks are cutting back drastically on personnel and maintenance.

If the state doesn’t provide funding, and the parking fees turn out to be inadequate, that leaves dedicated park-lovers scrambling to raise funds and maintain the park.

When Erin Corra lost her job as interpretive specialist at the park in 2010 due to state budget cuts, she turned to the Washington State Parks Foundation, the Center for Whale Research, and Ralph Munro, one of the creators of the park back in 1984, to help her create a support group, Friends of Lime Kiln Society (FOLKS).

Two full-time employees, Schlund and assistant ranger Rich Doss, plus four more in the summer, maintain the buildings and grounds of Lime Kiln Park plus another 15 island state parks including Sucia, Jones, Stuart, and Turn. There’s no way they could also keep the Interpretive Center open daily, so about 20 volunteers from FOLKS staff the Center and act as docents, assisting the public and answering questions.

FOLKS also raises funds and seeks grants — for example, to help maintain the lighthouse used by The Whale Museum and whale researcher Dr. Bob Otis, who offers public lectures and answers questions on whales during the summer. They won a $4300 LEP License Plate Grant for repairs to the lighthouse. There are lighthouse tours in the summer, and the building can be rented for weddings and other special occasions.

During 2012 FOLKS served nearly 26,000 visitors at the interpretive center, sold $15,000 worth of merchandise there, and sold Discover Passes totalling $27,000. All the money raised by FOLKS stays in this park.

Another source of revenue can be concessionaires in the park — such as Cynthia Burke who opened her Red Checkered Picnics last summer in a trailer behind the interpretive center.

It seems a natural to offer food in a place where people may want to hang out for a few hours waiting to see if the whales come by — and where they do swim by almost every day in the summer. Red Checkered Picnics will re-open again on or about Memorial Day.

A public meeting was held some years ago on the island to consider the possibility of offering camping at the park — but the idea was overwhelmingly shouted down. Later, a proposal to buy Lakedale Resort with its revenue-producing camping facilities failed because of inaction by the state.

Now, Schlund says, someone has inquired about providing “glamping” (so-called glamour camping) at the park. It’s a question, he says, of what the public is willing to accept in the absence of tax money.

Or is it time to get the legislature to once again provide public funds for state parks?

Ralph Munro makes an important point about the creation of the park. He writes,

“Your readers might hate it, but the park was a political deal. Washington State Parks had wanted the property for a long time and were hopeful that the federal government would surplus it….

Republican Governor John Spellman was in political trouble and facing a very tough re-election in 1984. Someone in the White House wanted to assist Governor Spellman… to make the Governor look good….

One of the state agencies that I checked with was State Parks. They told me that they really wanted Lime Kiln Lighthouse and property. I was enthusiastic about that because of my work to protect whales during the Dan Evans administration. So I put Lime Kiln on the list and we got it.

We had a big dedication with the Governor, etc. … Alas, Governor Spellman was defeated anyway.

Sometimes political ‘deals’ can benefit the public in a very big way. And we proved that watching whales from the shore can be a wonderful thing.”

Ted Schlund says that State Parks is “really trying to get $18 million from the legislature, just to maintain the present level of service” in the parks.

Do our readers “hate it” that politics helped create our park? Or are they willing to lobby for money to support all the State Parks?

In the meantime, buying an annual Discover Pass for $30 can show your support, and if you don’t feel you can afford that you can earn one by volunteering 24 hours of work at the park. Get in touch with FolksSJI.org or Find them on Facebook.