Free Willy, twenty years ago this year! What have we discovered, what have we learned, what’s left…. 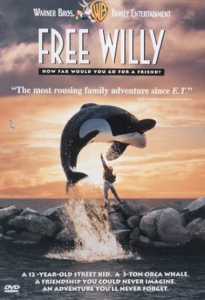 Do you remember where you were, the first time you saw Free Willy? For me, it was in a movie theatre in Eugene, OR, with a packed house that screamed & cheered & clapped when Willy gets away at the end (see the poster at right, for spoiler). It was a football game where the home team won, a fairy tale that wasn’t Grimm, it was a tale of justice, unpeeled. It was awesome.

Then, during the filming of Free Willy 2 (do you remember this?) there were discussions with the Town Council (in’95) to ask the film’s producers (while they used Friday Harbor for the movie) not to mention the name of Friday Harbor – there were concerns (gasp!) that too many people would come to the island.

Those were the days.

One of the byproduct events of the movie was the eventual real-life release of the whale who played Willy, a captive killer whale named Keiko. Was this a good idea? Did it work out? Did humans learn anything from the experience about orcas, or about themselves?

I got to shake David Kirby’s hand last summer when he was passing through Friday Harbor (WA) on a promotional tour for his new book, Death at SeaWorld. I found him thoughtful, articulate, and an impassioned warrior against marine mammal captivity. Reading Death at SeaWorld made me want to read the article linked below.

He shares his take on what we could have learned, what we missed, and perhaps what lies ahead in this penetrating essay. Let me know what you think.

Here’s the link to David Kirby’s remarks about Keiko on the 20th anniversary of Free Willy.

And…. here’s the trailer for the movie, back then.