Join historian Boyd Pratt as he explores how agricultural techniques employed by Belle Vue Sheep Farm in the 1850s have had a lasting impact on San Juan Island during a PowerPoint lecture scheduled at 7 p.m., Wednesday July 8 in the San Juan Island Library.

The program is free. Call the library at 378-2798 for special access information. 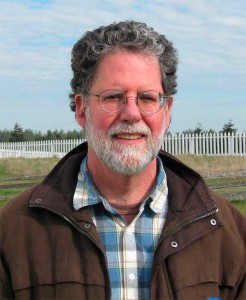 Established in December 1853, Belle Vue Sheep Farm was the last of the agricultural facilities established by the HBC south of the 49th parallel. The foray into agriculture by a company principally known for the fur trade had begun in the 1820s as means to feed and clothe employees.

However, by the late 1830s the company operated several corporate farms in the Oregon Country, which, combined with timber and fishing interests, made it an economic force on the Pacific Rim. Wool, mutton, lumber and fish, in addition to furs, were shipped from the West Coast to Russian America (Alaska), China and other points west, as well as to England. 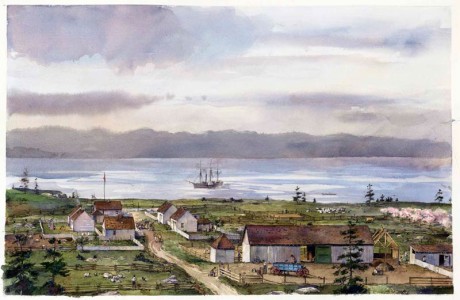 A watercolor rendering of the farm by Richard Schlecht of Frederick, Maryland

In just under six years the San Juan operation grew from 1,369 head of sheep on the home prairie (today’s American Camp prairie) to more than 4,500 head scattered in four other sheep stations on prairie lands throughout the island. The Company also grew fruit and cereal crops and initially salted and barreled salmon purchased from Indians on the beach. 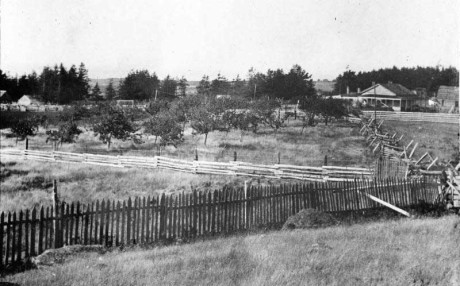 The Robert Firth farm at American Camp near the turn of the 19th/20th centuries. Firth was the last Hudson’s Bay Company agent at Belle Vue Sheep Farm and chose to remain on the island when The Company pulled out in 1864 – Contributed photo

The legacy left on San Juan Island by Charles Griffin, chief trader, and his staff is still apparent. Many of the island’s roads today trace the paths of the sheep runs carved through forest and around the tremendous rocks left behind by the glaciers. A few of the prairies are still in use for grazing, though in some cases sheep have given way to alpacas, which pay more per acre.

Pratt has been studying Belle Vue Sheep farm and agriculture in general on San Juan Islands for nearly two decades. His complete transcription of the Belle Vue Sheep Farm journals, with footnotes, are available on the park’s website (see below). He has also written “The Disputed Islands,” a definitive study of island life during the joint military occupation from 1860-72.