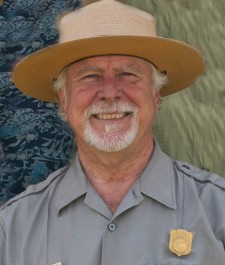 Mike Vouri shares his twenty years experience with the Parks…

Vouri will retire on December 31 after nearly 21 years at as an interpreter and historian, occupying the same office at the American Camp Visitor Center. Along the way he saw the park grow from 1,752 to 2,134 acres and develop from an organization largely focused on history to one that also celebrates its natural resources that include forest, prairie and saltwater shoreline.

“I’m a historian, so naturally we developed programming that addressed that, but I also was interested in the flora and fauna,” Vouri said. “It was a challenge to interpret them creatively as before I arrived here I couldn’t tell you the difference between a Douglas fir and hemlock. Fortunately I was blessed with co-workers and San Juan Islanders who have been able teachers.”

Among the topics he will discuss, illustrated by PowerPoint, will be the growth of the living history program, including the annual Encampment, the expanded programming covering a variety of topics, the park’s Sesquicentennial Celebration in 2009, the acquisition of the Mitchell Hill and Westcott Bay properties at English Camp, new interpretive signage and even a little history. He also participated in the park’s General Management Plan, completed in 2008.

“I’ve written five books since I came here and you always think you know it all, but that’s not ever the case,” Vouri said. “I’m still learning new things about the Pig War even at this late date—that’s why my first book is going into Third Edition—and I will share some of these during the program.”

Vouri arrived here in March 1995 after serving six years as a public affairs officer and history curator at the Whatcom Museum of History and Art in Bellingham, WA. Before the museum, Vouri worked as a newspaper reporter and editor, a public affairs officer for the Air Force Reserve and as assistant director of the Washington State Department of Veterans Affairs. He also served nearly nine years in the U.S. Air Force, which included a tour in Vietnam as the crew chief of an O-1 Bird Dog in 1968-69.