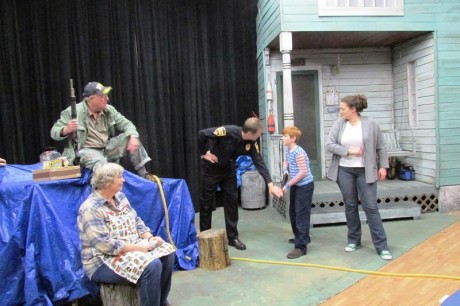 “They can have my blue tarp when they pry it out from under my cold, dead butt!” So says David in SJCT’s winter play, One Blue Tarp, opening at San Juan Community Theatre THIS Friday and Saturday, February 19-20 at 7:30 pm and Sunday, February 21 at 2:00 pm.

While the line might sound serious, Travis Baker’s play is meant to be funny and thought-provoking as he centers his plot on the rights of property owners. In this case, these owners live in Maine, but the story rings true for Northwesterners as well, as David fights for the right to keep a big pile of junk under a blue tarp in his front yard—even if it is an eyesore to tourists and his wife.

One Blue Tarp was named the “2013 Best Play for Maine” in the prestigious Clauder New England Playwright Competition, and was a finalist in the 2011 Eugene O’Neill Playwright’s Workshop. It eventually made its way to Friday Harbor’s On Book! Readers Theatre series last year, receiving enthusiastic responses from full-house audiences to become a fully-staged production in our Off the Rock! contemporary performance series.

Directed by Joy Van Camp, the play continues through March 5; two of the performances, on February 20 and February 21, will feature a “Talk Back” after the show featuring FH Town Administrator Duncan Wilson and moderator Tony Vivenzio.