Camas and Chocolate Lillies at the Nation’s Capitol 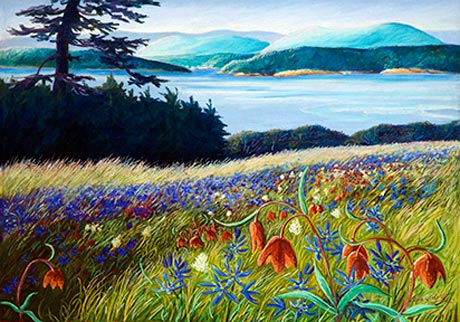 I recently had one of my island landscapes accepted into a show at the National Botanical Garden in Washington D.C. In celebration of the National Parks 100th anniversary. The art on display showcases the native flora of our National Parks. My pastel represents American Camp with Camas and Chocolate Lilies.

I am submitting to you a photo of the piece and a press release with more information from the National Botanical Gardens.

And here’s the official press release:

Flora of the National Parks opened Thursday, Feb. 18 at the USBG on the National Mall. Free and open to the public through Oct. 2, 2016, the exhibition features more than 80 illustrations, paintings, photographs, and other art forms ranging in size from intimate 12-inch pieces to large-scale, 7-foot dramatic panoramas that showcase key plant life in national parks across the country. The USBG is staging the show to mark this year’s centennial of the National Park Service (NPS) and to highlight the diversity of the nation’s flora protected within national parks.

Nancy’s 22” x 28” Camas and Chocolate Lilies was created as a dry pigment pastel.The artist lives in Friday Harbor Washington. She came to the island in 1978 and has created many images from the park over the years in her earlier silkscreen prints and now in her recent pastel paintings. She has led several “sketching in the field” workshops at the park sharing how she works and gathers inspiration.

She says “Walk in out the national world often. Honing in to the world around you with sketching tools or a camera can greatly increase your powers of observation and enrich your experience.”

Camas and Chocolate Lilies are much loved wild flowers by islanders and visitors alike. Blue Camas was once an important food source for Native American residents of the island. The native peoples periodically burned areas to insure habitat for the flowers . The park also maintains the prairies at American Camp where the flowers grow in the grasslands with sunshine that they require.

More detail about the art exhibit:
“We are thrilled to present this exhibit showcasing the biodiversity of plants and landscapes in our national parks,” said Ari Novy, United States Botanic Garden executive director. “Our mission is to connect people with plants. There is no substitution for actually experiencing plants alive in their native ecosystems. We hope this exhibit will inspire people to explore and value plants in their native habitats, especially at our amazing national parks.”

Among the many plant and tree species depicted are iconic flora such as giant sequoias, bald cypresses, saguaro cacti, mangroves, ghost orchids, and magnolias. Large graphics on the gallery floor also depict the ground surface in different national parks so that visitors “stand in” the plants’ and trees’ landscape as they move through the gallery. Plants from the U.S. Botanic Garden collection will accompany the exhibit.

Programs connected with the exhibit will be offered throughout the run, including botanical illustration and photography workshops, meet-the-artist programs to interact with the artists included in the exhibit, and lectures by national parks rangers and other flora experts from across the country.

The artworks were selected from among submissions by hundreds of artists last fall for the eight-month show, which is installed in the USBG Conservatory near the foot of the U.S. Capitol on the National Mall, 100 Maryland Ave. S.W., Washington, DC. The USBG is one of the oldest botanic gardens in North America, with more than one million visitors annually. More information about the exhibit, programs, and visiting the USBG is available at www.USBG.gov/FloraoftheNationalParks.