“A Minister and a Therapist walk into a bar ….” 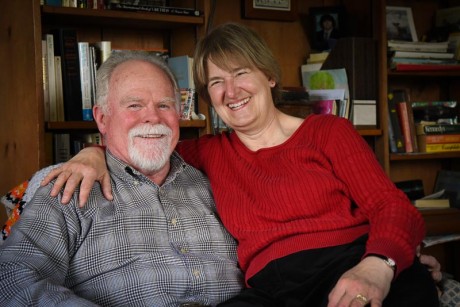 So begins the invitation to the wedding of Beth Purdum and Dave Eden. The two met through the Kiwanis Club, where Dave has given himself responsibility for “member retention.”

So when he invited her to have a drink with him at the American Legion and a friend asked her, “Is this a date?” her response was, “I’m not sure.”

He says now, “I had flirted with her but she never took me seriously.”

And she says, “I guess I was out of practice.”

Beth has been the pastor of the Lutheran Church in the San Juans, encompassing congregations on San Juan, Orcas, and Lopez, since 2014, and before that for 27 years in Colorado and New Mexico.

Dave has been practicing marriage and family therapy in Friday Harbor for almost 32 years.

Music is a big part of both their lives. Dave has been playing trumpet with the One More Time Band for 30 years, and also plays Taps on request for many occasions. Beth plays several instruments — “none of them well,” she claims.

Jenepher Reeves will provide the wedding music, there will be solos by Sue Collado on the oboe and Dorothy Baker on the piano, and the One More Time Band will play for the reception at the Mullis Center following the ceremony. And guests will be welcomed to the church by Helen MacKay Sanders of Lopez on the bagpipes.

Their wedding trip will take place in August, to England and Scotland, with the Royal Edinburgh Military Tattoo as a highlight.

Beth, who has not been married before, will gain a son and daughter and four granddaughters; and Dave is gaining a beautiful golden retriever, Tau.

They will live in Dave’s Friday Harbor home.