Smuggling, murder and fast boats in the San Juan Islands 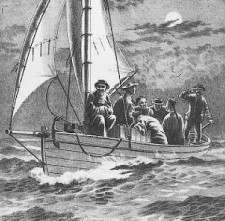 If you love a leisurely cruise around the San Juan Islands and are curious about the smugglers of olde that haunted our shores, the Orcas Island Historical Society invites you to climb aboard the “Cruise Into History” yacht that leaves from the Orcas ferry landing on May 15 with Orcas Island Eclipse Charters!

A local historian will point out the smugglers’ haunts and relate tales of rum running, Chinese labor and opium smuggling and murder and skullduggery on the high seas while you relax and take in the views. The 4-hour trip will take place aboard the 56′ Orcas Express.

Ninety-nine dollars (after the group discount is applied at the time of purchase) plus tax will get you this plus a great lunch from the Orcas Landing Store, beer, wine and other beverages and an illustrated souvenir booklet to commemorate your historical day.

This popular event always sells out quickly, so make your reservations now by going to www.orcasislandwhales.com and clicking “Other Tours” or by calling 360-376-6566 for the “Cruise Into History” on May 15.