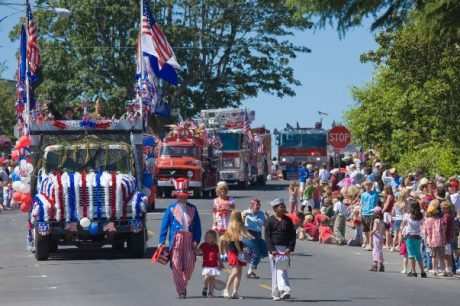 Applications are now available for the 2016 4th of July Parade. Parade organizers are expecting a full field and participants are encouraged to sign up early due to limited parade space and time considerations. The forms are available at the San Juan Island Chamber of Commerce office, 135 Spring Street, or may be downloaded from the Chamber’s website.

Thanks to a generous donation from King’s Market, the prizes to be awarded have been significantly increased as follows:

The previously announced theme will be “America the Beautiful…100 Years of National Parks!” Grand Marshals Mike Vouri and SJI Park Superintendent Elexis Fredy will represent the National Parks’ first 100 years and the Parks’ next century, respectively. The National Park Service turns 100 years of age in 2016 and San Juan Island is excited to join in honoring our National Park system.

This year’s inaugural “Citizens of Honor” are Gerry and Sonnie King, who were chosen for their outstanding community contributions.

The parade will start at 10:30 a.m. on July 4th and proceed down historic Spring Street through downtown Friday Harbor. Completed and signed applications along with your $25 entry fee are due no later than Tuesday, June 28th. For additional information about participating in the 2016 Friday Harbor Independence Day Parade, please email parade [@] sanjuanisland.org or call Traci Wilson, Parade Coordinator at 360-298-7760 or 206-914-7940.