Origins of the Drugstore Mural “For Love of an Island”

A little while ago we posted a photo of the Drugstore Mural asking if anyone had information on it’s origins. Many thanks to Lori Stokes for following up with the answer… 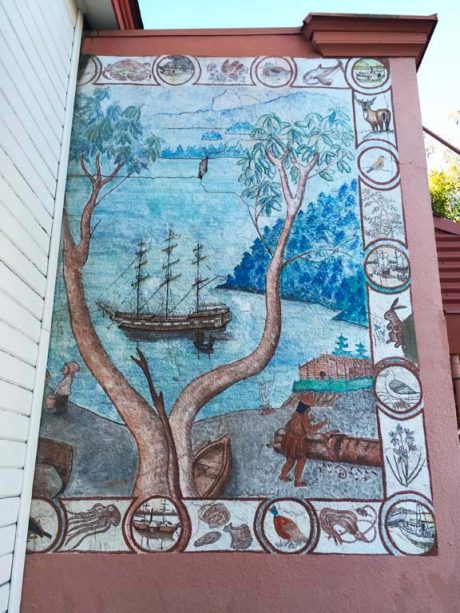 For Love of an Island – Peggy Sue McRae Photo

As a member of the Friday Harbor Arts Commission, I’ve been working on preparing a catalog of all the public art in town, both that owned by the town itself and that privately-owned but in the public way.

One of these pieces of art is a mural (or more correctly I should say, a portion of a mural) on the side wall of Friday Harbor Drug, where the old part of the building joins the newer part, to the left of the front entrance. You’ll see it walking down Spring Street towards the water. Some of the mural was covered over when the buildings were joined. 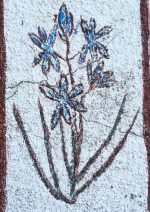 After a photo and a story about my search for information appeared on Facebook and in the San Juan Update, I received two phone calls from people who said, “I know who painted that!” But interestingly, each identified a different person! Gary Boothman told me that it was an old friend of his, Tom Brudenell, who was a painter and muralist living on Shaw at the time. Since Gary didn’t know if Tom was still alive, or where he might be living now, I Googled his name and discovered that he is indeed alive, and is living in Canada. An interesting article about him had recently been published, so I emailed the publisher and asked if he knew how I could reach Tom. He did, and shortly thereafter Tom and I spoke on the phone. Tom was amazed that part of the mural is still intact on the wall; he commented that usually when construction of this nature takes place, the entire mural is painted over. 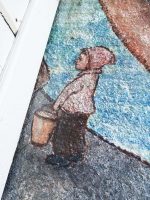 So here is what Tom told me. In 1972, he was living on Shaw, and spending part of his time going to rural communities throughout the state, helping to create what he calls “people’s murals.” He was asked to facilitate the creation of one of these in Friday Harbor, as part of the town’s celebration of the centennial of the peaceful resolution of our renowned Pig War. So he gathered together some interested residents of a variety of ages and artistic talents, and as a group, they designed and painted the mural. Tom described his role as a “catalyst of creativity,” simply facilitating the planning and execution of the mural rather than painting it himself. His main job, he said, was to serve as the technical advisor, since none of the town residents involved had much experience in painting murals and therefore needed guidance about how to prepare the wall, what kind of paint to use, etc. 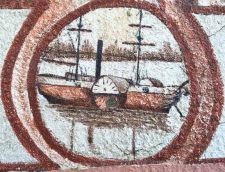 The chair of the Town’s Centennial Committee, Joyce Wampler, named the mural “For Love of an Island.” The mural depicts the past on one side and the present on the other, with the branches of a large Madrona dividing the two. The Discovery, the first English ship to arrive here, appears in the center, and the mural contains numerous images of island wildlife, boats, and people.

An article from the Friday Harbor Journal in June of 1972 identifies the painters as follows: Bill Cox, boats; Ines Robertson, flora and clam diggers; Cass Nielsen and Scott Lowe, birds; and Kay Eichert and Joyce Wampler, animals. Jack Benedict, Ed and Hedda King, and Carl Stoddard provided information about the Salish people, whose images were painted by Bill Cox.