Our Own SJI CC Thistle Slayers 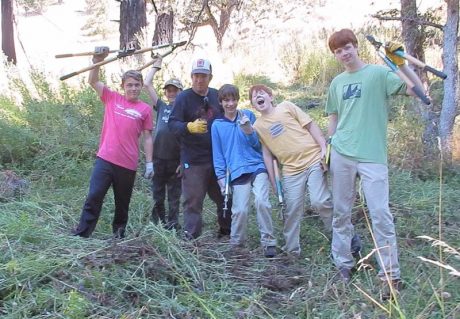 On two very hot days of July, Friday the 22nd and Tuesday the 26th, the San Juan Island Conservation Corps (SJICC) climbed up Young Hill to take down the thistle. The first crew of four kids with the CC of Middle School looked like the proverbial David against Goliath but as you can see from the photos these young kids made quite a dent in the huge thistle patches which threaten to overtake Young Hill.

Next, Director Matt called in the calvery which arrived by the busload and worked hard to push back the Bull Thistle. Bull Thistle is the worst kind, with thorns covering the plant that eventually defy the best gloves and clothing. The older group piled up another tarp full. The NPS provided disposal. 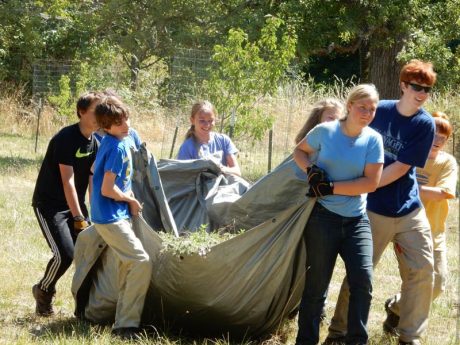 For some of these mighty thistle slayers, SJI CC is their first paid job experience. After several half days of fighting thistle, they may decide school in the fall looks even better. Zack Fincher, the Team Leader came back the second day as did several of the young first team, to take on the thistle again. This is a very difficult task. It’s hot, sweaty, hard work and thistle is very tough to pull. Thorns left exposed arms bloody. But the kids worked hard and with good team spirit in spite of the heat and thorns.

Young Hill has become thistle overrun these last 5 years. Thistle, as any farmer knows, ruins pasture by becoming so densely populated with that nothing can graze there or much less even walk through, and so has been a “thorn in farmer’s sides” here for decades. The plant has purple flowers surrounded by thorns, and as the area heats up they pop into puffs of seeds that drift on the wind to neighboring properties, spreading like wildfire.

In the past everyone, especially the NPS, kept thistle in our parks down to a minimum or gone from their properties. But the NPS staff has gone from 8 to 3 maintenance workers. And many newcomers don’t realize the importance of this eradication, until their property is overcome and the value of their property goes downhill. And the bigger problem is, the more quickly it spreads.

The young plants are easily pulled free by their roots. If you chop them off anywhere, even near the root base, the plant sinks its roots deep and the plant comes back stronger, bigger and impossible for the ordinary person to pull up. Which starts the process of cutting the plant down every year for several years till it is overcome. Also mowing regularly before it seeds, four to five years in a row will stress the plant until it gives up.

The thistle threat is so bad the Refuse Center will take the plants to dispose of free of charge. The bins were full of it these last weeks from all over the island. If you leave the chopped plants on the ground they will continue to force the seeds into the air. The plant’s whole purpose is to re-populate no matter the consequences to the plant.

That is how our own SJI CC came to the rescue. Everyone who walks or rides in our parks say a big thank you to the NPS and the SJI CC.