by Sylvia Yamada and Craig Staude 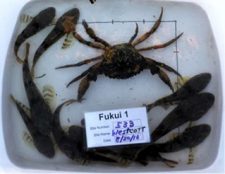 A green crab and numerous staghorn sculpins from the catch of a Fukui-type trap. Photo credit: C. Staude.

“Sylvia, I think we caught one!” Craig Staude shouted excitedly as he and his team of volunteers opened a baited trap in a tidal channel near the sculpture park at Roche Harbor on August 30th. Sure enough, the 74-millimeter-wide male was the first live European green crab ever caught in Washington’s Salish Sea! Why is the discovery of this green crab specimen such an important find?

The European green crab (Carcinus maenas) has invaded temperate marine communities around the world since the time of sailing ships. When abundant, green crabs are voracious predators on native species including clams, oysters, and crabs. They are also ecological engineers, causing damage to valuable eelgrass beds by ripping up the plants in search of food. The potential for such damage is precisely why the discovery of green crabs in the Salish Sea is of such concern to biologists and aquaculturists on both sides of the border.