Island Senior: Seniors Celebrate the Sixties for Meals on Wheels and More 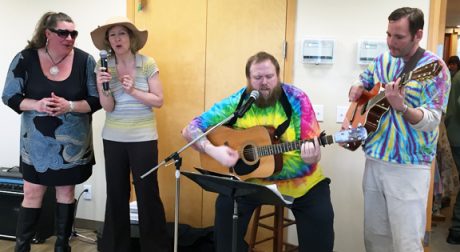 It said on the poster “60’s attire encouraged” so I put on my love beads and pinned a peace sign to my jacket before attending the Mullis Center’s, March for Meals to a 60s Beat, a benefit for Meals on Wheels and More. This special lunch was well attended by tie-dye wearing “flower children” of all ages.

Besides being served a delicious lunch we were entertained by live music. Featured musician Paul Arroyo serenaded us through lunch with songs by Gordon Lightfoot, Woody Guthrie, and Buffalo Springfield to name a few. Then as a grand finale the kitchen crew gave us a lively rendition of the Mamas and Papas, California Dreaming. Some of us couldn’t help but sing along.

I spoke to Julie Meyers, the director of Meals on Wheels and More for both San Juan and Whatcom counties. Meals on Wheels programs have been in the news lately due to the president’s proposed budget cuts. Our program gets about a third of its funding from the federal government, the rest comes from donations, grants, and city or county sources. “The loss of federal funds would be painful,” said Meyers, “and programs would have to be restructured if those funds are cut.” But this, I was told, is not cause for panic. Wendy Stephens, our Senior Services Manager recommends, “Let’s not speculate about what may be.” It is not clear at all that these budget cuts will actually take place. Stephens does not want islanders to worry and has confidence that whatever happens our community will not let our seniors go without meals.

Meyers suggested that it would not hurt to contact your representatives if these programs, both Meals on Wheels and regular senior lunches, are important to you. “Personal letters make a difference, let them know what these programs mean to you.” Other ways to support these programs are to donate money or time by volunteering. There is always a need for drivers, kitchen helpers, and more.

In 1967 the Beatles asked the musical question, “Will you still need me, will you still feed me, when I’m sixty-four?” Here at the Mullis Center the answer is… yes! We do need you and we will feed you. You don’t even have to be sixty-four.