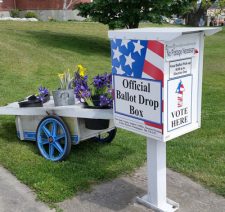 July 28, 2017 – A San Juan County citizen’s initiative concerning immigration has been approved to go to the November general election ballot. Initiative 2017-7 required 1,635 signatures (which represents 15% of the votes cast in the County in the last gubernatorial election) in order to advance to the voters. On July 5, the sponsor turned in 156 petition signature pages containing 2,668 signatures. On July 12, the petition was certified with 2,382 valid signatures. Upon certification, the Auditor is authorized to submit the measure to the voters at the next general election.

In order to consider its options, and to facilitate public discussion, the County Council has scheduled a public hearing on the initiative for Tuesday, August 15, at 9:15 am. The public hearing will take place in the Council Chambers at 55 Second Street in Friday Harbor.

The right to create law by initiative has been available to San Juan County citizens since the adoption of the County Charter in 2005. Since 2005, five initiatives have been filed with the County Auditor’s Office. Of those, only two have completed the petition process and submitted petitions for certification. The previous one, Initiative 2012-4, commonly known at the GMO Initiative, was certified as sufficient, went to the 2012 general election ballot, and was adopted into law by the voters.

In addition, two “mini-initiatives” have been submitted. Mini-initiatives require fewer signatures and go to the County Council, rather than to the voters, for adoption or rejection. Only one of the two – Initiative 2010-3, concerning vesting of property rights – completed the petition process and went to Council. Council elected not to adopt the initiative into law.

For more information about the initiative process, contact the Elections office at (360) 378-3357.