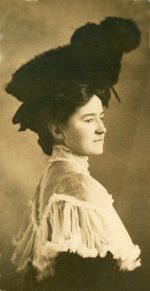 San Juan Island has long been home to independent and resourceful women. There were the native women whose wisdom and generosity our early pioneers relied on. There have been stalwart farmwomen who side by side with their husbands or on their own managed to create livelihoods from crops and livestock. And then there were the Misses Ada and Ella Mullis, early Friday Harbor entrepreneurs who made truly fabulous hats!

Ada and Ella Mullis were the sisters of Frank Mullis. Ada, Frank, Ella, and their older sister Anna were born in Clay County, Kansas. Then the family moved to Friday Harbor where in 1894 their youngest sister Frances was born. It was Ada who became well known throughout the county for her hats. She learned her trade “At a major department store in the big city” and with her sister Ella became the proprietors of Friday Harbor’s Millinery shop. In this popular historic photo you can almost miss the fact that the curious tableau pictured takes place in front of the millinery. 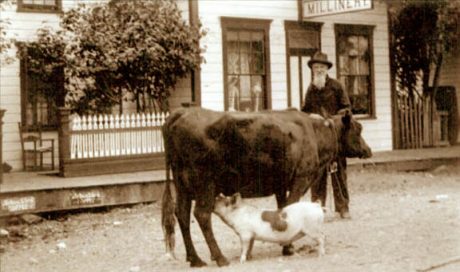 Millinery with Cow and Pig 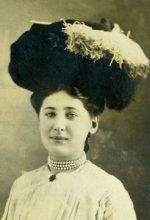 The sisters traveled to all of the Islands, even to Whidbey Island, to sell their wares and made purchasing trips often leaving their brother Frank to tend the shop in their absence. Here is an excerpt from Frank’s journal dated August 2, 1905:

Ada and Ella started for Portland this afternoon, to attend the Lewis and Clark Exposition and to trim a stock of fall hats at Lowengart’s wholesale house there. I am going to keep the millinery store while they are gone.

I’m not sure how Frank, at 20 years old, enjoyed selling ladies hats. His subsequent diary entries reveal that he was regularly relieved by “mama” Emma to go help “papa” George with some construction task.

In the 1970s when I worked as a nurse’s aid at the Island’s Convalescent Center, (now the Life Care Center), I met a woman from Orcas Island old enough to remember my great aunt’s hat’s. “Oh yes” she enthused. “People came from all over for Ada’s hats!”