New Stairway to the Beach at Cattle Point 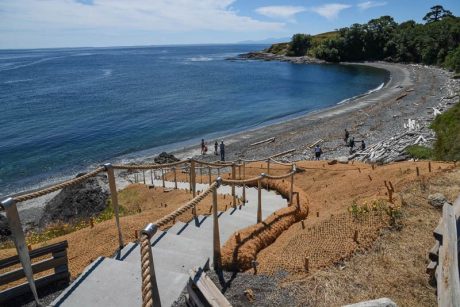 The most gorgeous public stairway on the island was built this summer in May and June at the Cattle Point Interpretive Area by the State Department of Natural Resources (DNR).

It’s built of quarried stone, with a hemp rope handrail with lovely stainless steel stanchions, reaching from the top of the bluff to a large rock outcrop, at which point steps have been cut into the rock to reach the sand and gravel beach. The rope is held taut by stainless steel turnbuckles at each end fastened into large boulders.

It replaces the previous crumbling wood and rebar stairway, and provides “safe access down to the tidepools,” in the words of San Juan Islands National Monument manager Marcia deChadenedes, and to the approximately 600′ beach. 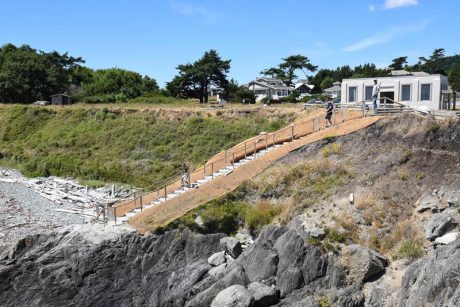 The only bid for the project came in so far above budget that the DNR decided to do the work in-house with a crew of six young people from the Washington Conservation Corps (WCC).

Unusually, the crew lived here on the island during construction in a house rented through VRBO (Vacation Rentals by Owner), according to Paul McFarland, the DNR’s Natural Areas Manager for the Northwest Region.

“This is not our normal approach to crew housing,” McFarland explained. “They more typically camp out when working in ‘remote’ locations not in practical commuting distance from Sedro-Woolley. But in this case I thought it important that they be comfortable and well rested due to the extended duration of the project, so we paid extra for housing.”

Nick Teague, Bureau of Land Management (BLM) outdoor recreation planner who lives on Lopez, said, “Looks like these new stairs are going to last a very long time, and the landscaping and replanting of the edges will help prevent erosion.

“Dang, they did a great job! I’m super proud of that WCC crew and the DNR.”