On Sunday there will be a free presentation, Around the World in “80 Days” via an Electric Car, at the Mullis Center. (Come for the Pancake Breakfast stay for the electric cars!). Presenter Alan Soule of Sebastopol, California will share his around the world adventure… 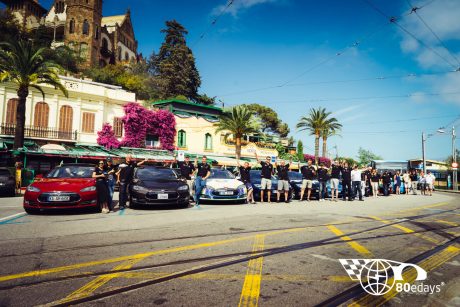 Around the World Race Begins in Barcelona, Spain – Contributed Photo

You are invited to a free (public) slide presentation at the Mullis Community Center on Sunday, September 3, from 1-2 pm by Alan Soule of Sebastopol, California.

In the summer of 2016, Alan and his EV (electric vehicle), a Tesla Model S, joined 12 other International EV driver-teams to circumnavigate the globe. Their goal was to promote the rapid adoption of non-polluting vehicles and to help dispel the myth of “range anxiety” that has been associated electric cars.

Their odyssey began and ended in Barcelona, Spain with no fixed routes and no pre-determined charging stops. Each team chose their own route and how and when they would stop to charge their cars. Team cars were transported together across the two major oceans in the hold of a cargo aircraft.

Alan Soule is U.C. Santa Barbara-trained mechanical engineer who was born in Berkeley, California. He is a passionate advocate for electric vehicles and clean renewable electricity generated by wind (turbines) and  solar (photo-voltaic panels).

We hope that you can join us for his amazing travelogue.

NOTE: Several local San Juan Island EV owners will have their EV’s parked at the Mullis Center parking lot and they will be available to answer questions about their cars. GM, Nissan, Kia, BMW, SMART (Mercedes Benz) and Tesla EV’s will be on display.