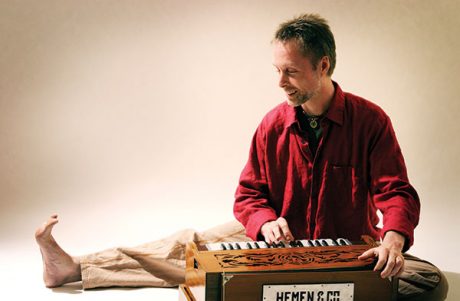 Girish, an accomplished musician of many genres, former monk infused in spiritual practice, loving wordsmith linking lyrics and rhythm in a blissful musical event, sings traditional Sanskrit mantras with a modern, funky, yet deeply devotional twist. Accompanied by his amazing band, Girish invites his audience at his kirtan concert to participate by singing along, call and response chanting, and dancing.

Girish has been recommended and featured in “O, The Oprah Magazine”, “Yoga Journal” “Spirituality and Health Magazine”, “LA Yoga Magazine”, “Common Ground” and “Yogi Times.” Girish’s original music catalog of five albums is popular in yoga studios and music festivals all over the world. His well received “Mantras and Music” book published by Simon and Schuster will be available. Girish Chant Workshop
Saturday, January 13, 11:00 to 1:00

Girish’s two-hour chanting immersion is for anyone seeking to bring the bliss of Sanskrit chanting into daily life or to deepen an existing chanting practice. You’ll explore several of the most powerful Sanskrit mantras and offer practical guidance on integrating them into your yoga, meditation, or pranayama practice. No previous experience necessary!