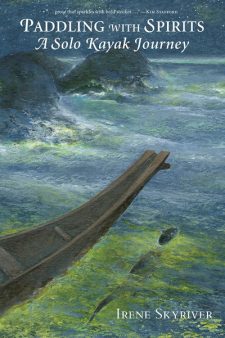 Join Griffin Bay Bookstore at the San Juan Island Library on December 13th at 7:00 pm for an exciting evening with Lopezian Irene Skyriver when she presents her wonderful book, Paddling With Spirits, the story of her solo kayak trip from Alaska back to the islands.

Inspired partly by her own spirit of adventure, and partly by the stories of her native coastal ancestors, Irene Skyriver celebrated her fortieth year of life with a solo kayak voyage, paddling from Alaska to her home in Washington’s San Juan Islands.

Paddling with Spirits: A Solo Kayak Journey interweaves the true account of her journey with generational stories handed down and vividly re-imagined. Beginning with her great- grandmother’s seduction of an Indian fighter turned trader, and following her ancestors on both sides through oil booms, orphanages, wartime romances, dance halls and cattle ranches, Paddling with Spirits dips like a paddle itself between the stories of those who inspired her, and Irene’s own journey down a lonely coast.

As she encounters harsh weather, wolves, bears, whales, and the wild beauty of the coastal waters, she reflects on her own life and on the lives of the many people she meets along the way, before her final triumphant return home. Paddling with Spirits is a wild, brave, and thrillingly original adventure.

“The interweaving of the past and the present form a complex and beautiful fabric that carries this story beyond that of a simple family history.” —Steve Brown, past curator, Seattle Art Museum, Pacific NW Coast Native collection 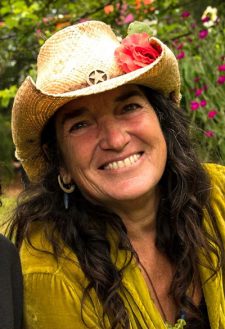 A Washington native, Irene Skyriver was born in Port Townsend and raised in the country. She moved with her children and horses to Lopez Island in the San Juan Islands thirty-eight years ago, where she lived off-the-grid, and as a single parent, spent most of those early years growing a garden, and letting the outdoors and beaches be her family’s sanctuary, inspiration, and teacher.

She organized parades for Earth Days, International Women’s Days, and was one of the early founders and shapers of the Summer and Winter Solstice celebrations, as well as Passage Rites ceremonies for youth. A poet, dancer, and a singer of traditional Earth Circle Songs, writing came later for her, mostly because one has to sit down to do it!

Irene received a full fellowship to Fishtrap Writers Conference, based on a submission from Paddling With Spirits. This was followed by a grant to finish the work. In between involvement in community, her market garden, and milking goats, she plans to sit down and accomplish these new writing endeavors and is at work on her second book, a novel.