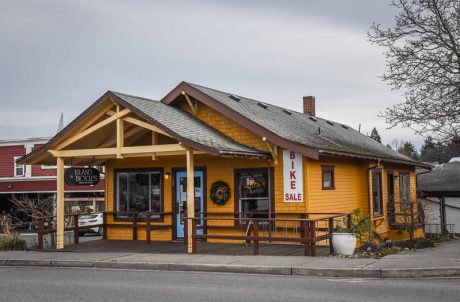 After 31 years in business and 28 of those at its current location, Island Bicycles is closing.

“It’s been a really good ride and it’s the best career I’ve ever had” says owner Paul Ahart, “but there comes a time where you begin to value your free time a little more and your money a little less.”

In 1986, Paul bought the business from Mike Crandall and Maryanne Sevina, which at that time was on West Street, next to where Friday Harbor House is now. He opened the store at its current location in November of 1989 and in recent years especially it has really been booming as a rental shop. “More and more people are walking on the ferries these days and then wanting inexpensive and enjoyable transportation when they get here”.

And along with that increase in business, there has also been a shortage of suitable employees – our cost of living and housing crisis is just too much of a barrier for a lot of people.

As a result, Paul has had a 7-days-a-week work schedule almost every year from May through October. “I just need to find time to enjoy living on this beautiful island for a change.”

The store is closed now, but Paul will hold a liquidation sale at the store on January 19th and 20th. “I really want to move as much of this merchandise as possible so prices are going to be cut as low as they can go.” New bikes, used bikes, gear, clothing and accessories will all be priced to sell. Hours will be 10:00 – 5:30 at the store, 380 Argyle Avenue, next door to Ace Hardware.

Paul won’t be saying goodbye to the bicycle business entirely however – Starting later this year he will be operating a home-based, appointment-based bicycle repair shop. If it’s convenient for a customer to drop off a bike, then they can drop it off, or if it’s convenient for Paul to pick it up, he will pick it up. And working no more than 4 days a week should provide enough money to keep he and his wife Marty going just fine. “If we’re frugal, we’ll still be able to enjoy the good things in life, and we’ll have more time to enjoy them.”