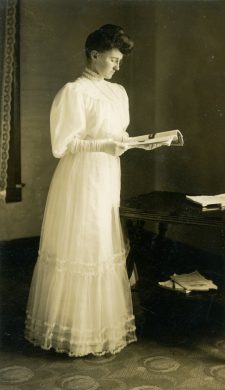 Earlier this month I took the Mullis Center’s bus to Mt Vernon on the regular monthly shopping and medical appointments trip. I went to meet my sister Sally and deliver late Christmas presents. What I brought home was a large box of “old Friday Harbor stuff”. My sister had been going through our late mother’s papers and I volunteered to become the custodian of anything from our grandparent’s era. Among records of births, marriages, graduations, and deaths, I found a some treasures. Here are a few gems that I would like to share.

In an earlier San Juan Update article I wrote about my great aunt Ada and the Millinery Shop she and her sister Ella kept in Friday Harbor. I was delighted to find a “new to me” photograph of Ada Mullis. The Mullis sisters were indeed the arbiters of fashion in early Friday Harbor as I think this photo illustrates. I tried zooming in on the magazine in her hand to see what she was reading. All I could make out was the price, 13 cents! 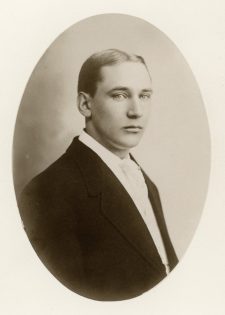 I still have much to go though. Meanwhile, here are descriptions by my grandfather of a few of his artifacts. As a young man, Frank Mullis worked on the Olympic Peninsula where he became friends with and took a life long interest in the Makah and native culture. Here from his notes… “This Indian Paddle was just freshly made when I bought it – probably 64 years ago – or 1898. Paddles had in a way some personality – this is a “Squaw’s Paddle” Bucks Paddles were a little longer and the point was longer – the extra length adding to the paddle’s usefulness when pushing out from shore – it was just a little larger all around. I distinctly remember this paddle cost me 75 cents. It had no paint – the painting was what I did.” And then, “All canoes carried “Canoe-Scoops”. The scoop was used sideways in a circular revolving motion – and if the sea slopped – even quite a gallonage of water into the canoe – it was scooped overboard in very short order.”