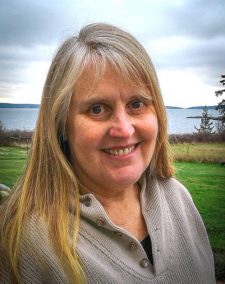 Lovel Pratt comes to Friends from Mulno Cove Consulting, where her work focused on safe shipping advocacy, reducing vessel traffic impacts, and oil spill prevention. She is a founding member of San Juan Islanders for Safe Shipping. While serving as a consultant for Friends and other environmental and governmental organizations, Pratt developed, facilitated and presented at a regional vessel traffic workshop; has prepared several comments on new and expanding terminal project applications and environmental reviews; and participated in numerous commercial shipping related rule-makings, committees, taskforces, workshops, and conferences.

“Lovel is a regional leader on marine policy issues and represents our community on critical issues. We are fortunate to have her join Friends of the San Juans with over two decades of experience and expertise at the local, state, and federal levels,” said Friends President Sanford Olson.

Pratt has over 25 years of experience working and volunteering in local county government, agriculture, affordable housing, and education. Pratt served for ten years on the SJC Planning Commission. In 2003, the Journal of the San Juan Islands named Pratt ‘Citizen of the Year’ for her leadership in the development of affordable housing. In 2008 she was elected to San Juan County Council where she served for one term.

While on the San Juan County Council, Pratt worked on commercial vessel traffic issues. She was appointed by the Washington State Association of Counties to several vessel traffic oil spill prevention, risk assessment, and rulemaking committees.

“Ensuring safe shipping through the San Juan Islands’ waterways is critical to maintaining our local and regional economy, culture, and environment. The addition of Lovel to our staff will ensure that decisions impacting the San Juans will be heard in Washington State, Washington DC, and British Columbia. The efforts to improve safe shipping; increase marine protections for orca, fish and wildlife; increase oil spill prevention and spill response capacity and safety; and improve transboundary coordination will benefit from the effective advocacy that Lovel will provide,” stated Friends Executive Director Stephanie Buffum.

Pratt moved to San Juan Island in 1991 and lives with her husband Boyd Pratt. They have raised three children and operated a small, diversified farm for 17 years. Lovel continues to work with Boyd Pratt on his local history research and writing projects, and is an active member of the San Juan Island Women’s Group.

FRIENDS OF THE SAN JUANS is a public interest non-profit organization dedicated to protecting the land, water, sea and livability of the San Juans and Salish Sea for people and nature. Learn more at www.sanjuans.org