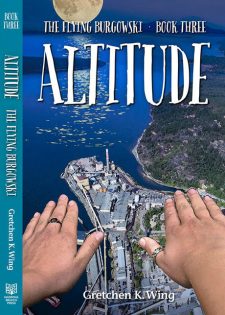 Griffin Bay Bookstore is excited to again host Lopez Islander Gretchen K.Wing. She’s returning to the bookstore on Saturday, June 2, 2:00—4:00 pm to present Altitude, Book Three of the Flying Burgowski Trilogy. This series is delightful for both young adults and adults. Don’t miss the chance to chat with such an enthusiastic writer.

After a summer of betrayal and heartbreak and an epically rotten year, 16 year-old Jocelyn (The Flying) Burgowski is fleeing family and friends on Washington State’s Dalby Island for school on the mainland. What good is flying if it wrecks relationships? The guy she fell for (in Book Two, Headwinds), almost destroyed her power. Now, discovering the ugly underbelly of mainland life, has Joss stumbled upon a fellow Flyer—only to bring her down? Confronting the dual forces of magic and maturity, Joss must face the question: what does “to thine own self be true” really mean?

Gretchen Klopfer Wing is the author of the Flying Burgowski young adult trilogy: The Flying Burgowski, Book One; Headwinds, Book Two, and Altitude, Book Three. A native North Carolinian, Wing moved with her husband to Tacoma, Washington in 1990, where she taught high school English and history and raised two sons.

Wing received her B.A. in English from Harvard University in 1984, and her Master’s in North and South American History from the University of Washington in 1993. After a twenty-year teaching career, Wing and her husband moved to Lopez Island, where she transitioned to her present occupations of writing, and baking at Holly B’s Bakery. She also writes and performs songs with her guitar, and enjoys running, biking, backpacking and reading. Her column, Spotlight on Lopezians, appears regularly in The Islands’ Weekly, and her short stories have been published in SHARK REEF. Find her blog, Wing’s World, at Gretchenwing.com