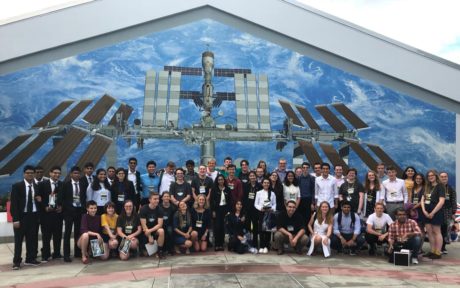 After 42 hours of design and preparation, the Friday Harbor Aerospace Team and associate schools from Texas, Colorado, Pakistan, India and the UK placed second at the International Space Settlement Design Competition World Championship. According to the judges, the margin between the first and second place team was paper-thin, the decision coming after three hours of deliberation.

Despite falling short of being World Champions the experience has only made the FHHS teams’ resolve stronger to make it back to Internationals next year while giving the team incredibly valuable experience with the Request for Proposal process, cross cultural communications, and a design challenge that asks too much while giving too little time.

Overall, the judges lauded the team’s design for a city on the moon geared to entice space businesses to establish a foothold in an emerging space economy. The team produced what was easily the best presentation of the day, both incredibly personable and detailed.

Having to present fifty slides in 35 minutes, the combined team’s design featured an opening design concept illustration from Max Mattox, an incredibly detailed yearly consumables chart for 18,000 residents from Joely Loucks and Lucy Urbach, a fully illustrated guide of lunar recreational opportunities from Evan Foley, and a fast emergency response system plus many images from Brandon Payne. Arlo Harold, working in Structural Engineering, helped with overall structural design and played a key role in getting the proposal into the judges hands at 7:30 Monday morning. Overall, the Friday Harbor team had a hand in the majority of the settlement design, either with their images, calculations, or design concepts.

Competition organizers specifically congratulated the Friday Harbor students for their unflagging work ethic and the thoroughness of their designs. Other team members routinely commented on Friday Harbor’s calm composure in the face of chaos and routinely turned to them because of their trustworthiness, collaboration skills, and quickly produced, impeccable designs. In short, Friday Harbor quickly established themselves as the go-to group who can compete with some of the best students in the world.

With the competition over, the Friday Harbor team could be heard enjoying the camaraderie of their international teammates late into the night and early morning, which, after all the competition, is what it’s all about.

Tuesday morning found the team on a private tour of SpaceX facilities which included a closeup encounter with a Falcon9 rocket and an incredible visit to launch pad 39A, during which the team got to stand on the launch pad itself. Pad 39A saw the launch of all of the Apollo and Space Shuttle missions, and it is rare to see it up close, not to mention to stand on it as it is being prepared to accept the nation’s next crew-capable rocket.

The Friday Harbor High School Aerospace Design Team members are Max Mattox, Lucy Urbach, Brandon Payne, Joely Loucks, Evan Foley, and Arlo Harold. The Aerospace Design team is coached by FHHS teacher Daniel Garner and was accompanied by Trudy Loucks and Jill Urbach. The Team would like to thank the Public Schools Foundation, San Juan Island School District, the Lions club, the Leos Club, and the San Juan Rotarians for their financial support. We would also like to thank Mike Loucks for his help in arranging the SpaceX tour, and all the marvelous people of San Juan Island for their thoughts and good wishes.