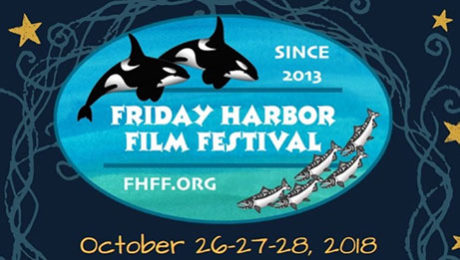 It’s moved up a month this year – the Friday Harbor Film Festival will be held over the weekend of October 26, 27 & 28 instead of in November like previous years.

Check out their website, www.fhff.org for all things FHFF! From volunteer opportunities, film descriptions and trailers, to film venues and schedules. And buy your tickets early at this link.

Program guides are out too – pick one up at various FHFF sponsor locations around town, on the ferries and at the FHFF office at 10 First Street. 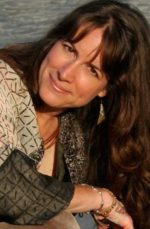 The Local Hero Award this year goes to composer Alex Shapiro. It’s an award presented to a current or former resident of the San Juan Islands who has made outstanding contributions to our quality of life, impacting people, animals, the arts, health, or the environment.

Alex is a composer known for her seamless melding of live and recorded sounds that often include striking visual and physical elements, and for her innovative uses of technology in her works. Alex moved to San Juan Island in 2007 to continue her successful creative life after an impressive career composing for film and TV, and concert music in New York and California.

She will be honored on Sunday, October 28 at 7:00 p.m. during the FHFF Final Awards Presentation. The evening will include celebrations of the Local Hero, film Category Favorites, and a screening of the Audience Choice Film Award at San Juan Community Theatre. 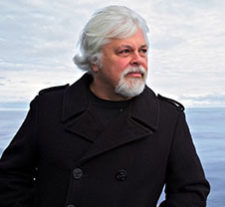 Captain Paul Watson has been chosen as this year’s recipient of the FHFF Andrew V. McLaglen Lifetime Achievement Award. This annual award honors an individual who has made outstanding contributions to raising the general public’s awareness of important issues, either through his/her activism or as a filmmaker. It is presented in memory of Andrew V. McLaglen, the award-winning film director and long-time resident of San Juan Island.

Paul Watson is one of the original founding members of Greenpeace. He also founded Sea Shepard Conservation Society and was more recently featured on seven seasons of Animal Planet’s Whale Wars TV series.

Captain Watson will be honored on Friday, October 26, during the FHFF Opening Night Gala. The gala will take place at San Juan Community Theatre, and will include a screening of the film “Chasing the Thunder”, a high-seas documentary that follows the eco-warriors of Sea Shepherd as they engage in an epic 110-day, 10,000-mile chase of the notorious poaching vessel, the Thunder.