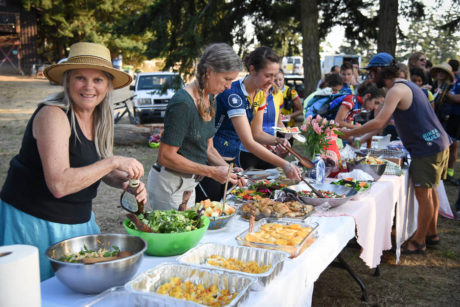 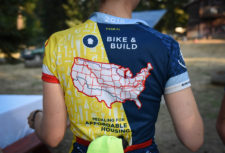 For the third year in a row, the San Juan Community Home Trust is hosting Bike & Build, a national non-profit organization that engages young adults in service-oriented cycling trips to raise money and awareness for the affordable housing cause.

This particular group of 25 riders started their route in Portland, Oregon about 18 days ago. From there, they rode to Aberdeen, Neah Bay, Port Townsend, Port Orchard, Mount Rainier and up through Seattle to Whidbey Island – doing 5 community service projects along the way – and finally ending up in Friday Harbor.

They arrived late yesterday at the fairgrounds campground and were treated to a large potluck dinner donated by members of the Home Trust, the SJI Trails Committee and other community members.

Today, they will help knock out a trail across the southern edge of the Home Trust’s Sun Rise II neighborhood. This segment will eventually be a part of a trail spanning from Sunday Drive, across the Home Trust neighborhoods and connecting with the Lafarge Open Space property, essentially becoming the last part of a safe walking route from town to Jackson’s Beach – a dream come true for many islanders that has been a long time in the making.

If you can spare an hour or two today and would like to be a part of this work party, bring some gloves, sturdy shoes and whatever yard tools you have (clippers, rakes, shovels, etc…) and meet the group at the Sun Rise II neighborhood anytime after 9:30 AM. To get there, just head east off of Argyle on Grover Street until your only option is to turn right. Turn right and find a place to park and there you are.

Many thanks to the Home Trust and their board member Chinmayo for her determination and dedication in making this event happen year after year.

Tomorrow, the Bike & Build crew will pack up their tents and sleeping bags, catch the ferry back to Anacortes and then ride up to Bellingham which will mark the end of this ride.

Click below for more photos of last night’s potluck –