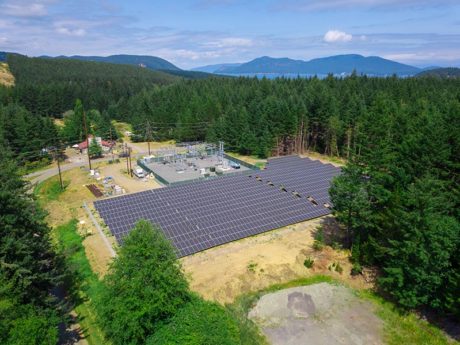 OPALCO’s first big community solar project is complete and energized! On July 31, 2018, the 504KW-DC array began producing power. The 272 OPALCO members who invested in the project will begin to see credits on their September bill for the energy produced to date. Member participation ranged from one unit to as many as 160 solar units.

OPALCO has a vision of sustainable, resilient and energy efficient communities for the twenty remote islands it serves. Community Solar is a first step toward realizing its vision. In addition to the immediate benefits for the members who subscribed, the array provides a start of the local power supply in case of emergency and is part of a long-range strategy to keep rates lower for members as market power costs rise in years to come.

Located on about 3.6 acres at an OPALCO substation on Decatur Island, the site was chosen primarily because of its proximity to a main feeder from the mainland. Puget Sound Solar (PSS) was selected through an RFP process as the contractor on the project, with local solar contractor Loren Dickey of Streamside Renewables acting as OPALCO’s representative.

As a co-op, OPALCO wanted the benefits of community solar to be available to all of its members. OPALCO partnered with the Bonneville Environmental Foundation (BEF) and garnered a matching grant of $50K to make 10% of the community array available to members from low-income households who are enrolled in the Co-op’s Energy Assist Program. Also, quite a few members accepted an invitation to purchase solar units as a donation for OPALCO’s low-income program, local non-profits and schools.

If you didn’t participate in this project, don’t worry – OPALCO is already planning for additional Community Solar projects. Future projects will likely be sited in village centers to provide direct back-up power to medical centers and grocery stores. Get on the list for the next project at solar@opalco.com.