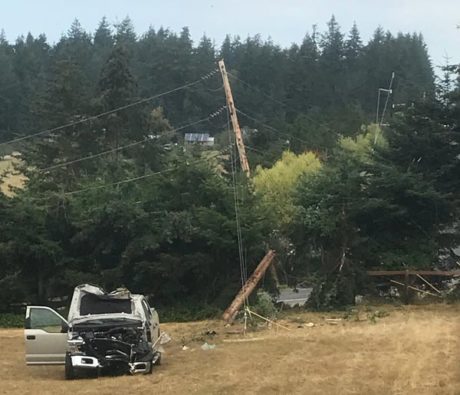 A medical emergency caused a truck to hit a transmission pole on Lopez Island, which also caused a grass fire. The driver was flown off island for observation and to treat relatively minor injuries – Contributed photo

All of Orcas, Shaw, Blakely and some of Lopez island were without power for almost 10 hours after a car accident on Lopez took out a transmission pole at 10:30 a.m. on Friday, August 17th. Power was completely restored by 8:15 p.m. to Orcas, Shaw and Blakely and by 11:30 p.m. to all of Lopez. The driver of the truck involved in the accident is recovering from minor injuries.

OPALCO crews responded immediately and made the scene safe for fire personnel to extinguish the fire caused by the accident. While the fire suppression and mop-up operations were underway, the OPALCO crew worked on switching (rerouting power away from the fault, where bypass routes are available) to get as much power to Lopez as possible, including restoring power to the ferry landing. 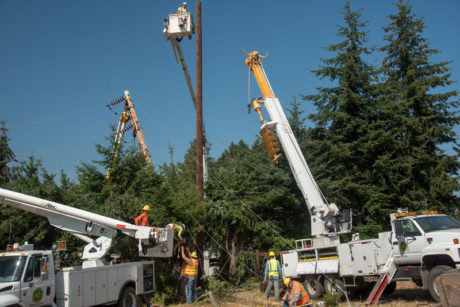 As crews from San Juan and Orcas arrived, Foreman Brian Swanson brought everyone up to speed on the project. The linemen installed a new pole, built out the pole top, and then transferred the high-voltage conductor to the new pole. The broken pole caused some damage along the transmission line; crews repaired and replaced cross arms and insulators on adjacent poles and then began the process to bring the power back up.

Thanks to the folks at Blossom Grocery, Lopez Village Market and to some neighbors in the area who brought refreshments to the crew during their long day of construction work. 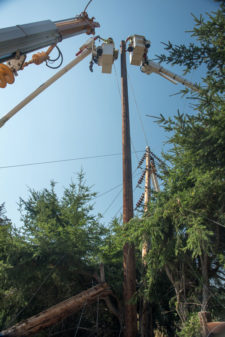 Currently, all of the 20 islands served by OPALCO receive power through a main feeder on Lopez. However, a second redundant feeder – or tap – was installed this year on Decatur Island, which will give OPALCO the ability to route power on an alternate path in case of an accident or emergency such as occurred on Friday. OPALCO crews are completing conductor and substation upgrade projects to prepare the distribution system to carry power from the new tap on Decatur all the way into Eastsound when needed. The new feeder path is scheduled to be energized in November.

Outage updates and photos were posted throughout the day on phones, Facebook, Twitter and on OPALCO’s 24/7 outage center (www.opalco.com/outages). OPALCO’s 24/7 off-site call center manages the high-volume of member calls during an outage and populates the new real-time outage map to keep members informed. Members with mobile phones can check the map, Facebook and Twitter for outage information. Those who do not use mobile phones can call into OPALCO’s phone system for less-detailed updates – or ask a friend with a mobile phone to relay information. OPALCO fielded more than 500 phone calls from members during this outage.

During an outage, it is difficult to estimate when restoration will be complete as testing can reveal additional issues before the full load can be brought back up. OPALCO is conservative about setting expectations for restoration times because of the number of variables in restoring power in the islands but is committed to giving regular updates on actual progress.