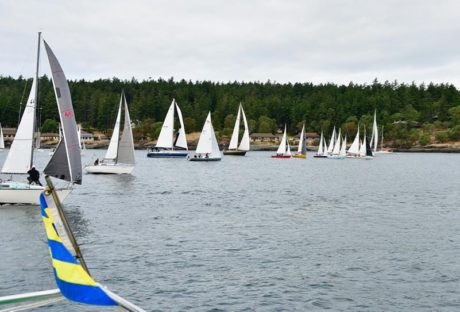 The start of the race – Contributed photo

The currents were strong, the winds temperamental, and the fleet diverse, making for a memorable 48th annual running of the Shaw Island Classic, a highlight of the summer boating season. Hosted by the San Juan Island Yacht Club, the race draws sailboats and crew from throughout the region to circumnavigate Shaw Island. The race drew 10% more racers than last year.

Our island topology challenges racers to factor in shifting winds, variable currents, narrow rocky channels and traffic from large boats filled with cars. Racers can circle the island in either direction, a choice best informed with deep knowledge of local wind and tidal conditions.

Although 90% of the racers thought riding the flood tide in a counter clockwise direction would be a winning strategy, Michael Durland of Challenge with race veteran Wally Lum, was contrarian, sailing clockwise and winning their class. Having competed in every one of the 48 annual Shaw Classic races, Wally Lum had a depth of experience with the course.

Spinnakers flew on the downwind leg down Upright Channel between Shaw and Lopez islands. The flood tide made for a fast leg even with lighter winds, as long as the racer avoided doing donuts in the eddies near Canoe island. The run across the top of Shaw benefited sailors able to master the gusty and variable southerly winds as some light showers came through. The tight Wasp Passage presented its usual challenges but with a favorable current for the counter-clockwise racers and the south winds, most made it through with flying colors.

For most, the race was decided within 1 mile of the finish line in Friday Harbor. The current was in full flood in San Juan Channel just as the winds decided to take a hiatus, after blowing in the 8-12 knot range for most of the race. Many strategies were tried but not a few racers became acquainted with Cape Caution several times as they inched forward and were pushed back. The best strategy appeared to be to keep to the Shaw shoreline and then swing into Friday Harbor. However, one winning boat reported they had a secret weapon in the form of a professional diver who knew exactly how to thread the currents and eddies on the San Juan Island shore.

“Racers often wish for the winds of the day before, or the day after. For this year, the stars aligned and the perfect day for the Shaw Island race was actually the day of the race,” said Jim Corenman of the Shaw Race Committee. “Just about everyone who started, finished– which is unprecedented in recent years.”

Two Sea Scouts and their leader, Eric Stone, helped man the Start/Finish boat and operated the race signal flags. The new Friday Harbor Sea Scout group had only had their first meeting two days before. By the end of the afternoon they had started a race and participated with the race’s Safety Boat in securing a sailboat that had lost steerage in Wasp Passage. An exciting first week as a Sea Scout!

Ben Colwell of his Formula 18 multihull, Rum Line, continued his winning record and took home awards for Fastest Elapsed Time, First Place on Corrected Time and First Place in the Multihull division. Also notable was the strong performance of racers from Orcas Island with seven boats placing overall, a sweep of the PHRF-D division and three first place finishes.

Prizes were awarded in all divisions. Race results are detailed below. Other than fastest elapsed time, all awards are based on corrected time, adjusted for time-on-time based on PHRF or committee assigned ratings. Detailed results and photos can be found at the Club’s website at www.sjiyc.com.