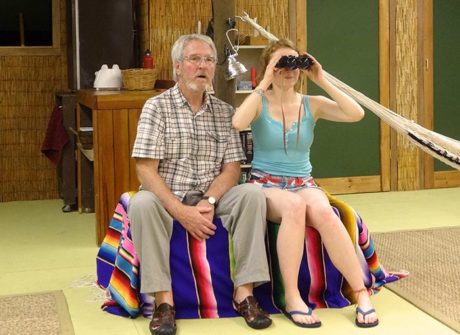 Only four more showings of Slowgirl and people who’ve seen it are raving about it. This is your last chance to see it before it’s gone.

It’s a story by Greg Pierce told with humor and sensitivity, of a friendship between a reclusive uncle and his teenage niece as they navigate the delicate regions of guilt, fear and truth.

Becky, a seventeen year old girl, has fled to her hermitic uncle’s retreat in the Costa Rican jungle to escape the aftermath of a terrible accident.

The week they spend together forces them both to confront who they are and what they are running from. It centers around the many ways tragedy can unmoor a life and the power of family to both wound and heal.

Suitable for children 12 and up. Occasional colorful language. A story for everyone who has ever made a mistake.

This Thursday, Friday and Saturday at 7:30pm, and Sunday at 4:00 pm at the Marie Boe Building at SJC Fairgrounds
Admission FREE – Donations appreciated

Slowgirl closes on December 16th and right after that Island Stage Left opens Christmas Memories on the 20th.