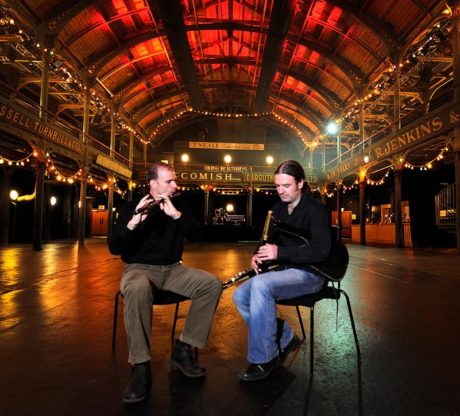 Organizers Ruth Fleming and Dan Paulson invite you to this event…

Cillian, uilleann piper and low whistle player, and Kevin, flute and whistle player, are part of the hottest Celtic band on the planet, Lunasa who have performed at our theatre to a sold out performance in the past.

We are thrilled to host these talented and fun musicians. Please contact me for more information if you need it. Tickets are first come first serve at $25.00.

Check out this praise in their media press release…

Cillian Vallely is the uilleann piper and low whistle player with the traditional Irish ensemble Lunasa, described as the “hottest Celtic band on the planet” (Irish Voice). In recent years he has played and toured with Natalie Merchant, Mary Chapin-Carpenter, Riverdance, and Tim O’Brien’s Crossing, in addition to recording as a guest on over 40 albums. He appeared on Bruce Springsteen’s 2014 recording High Hopes. Most recently, he released his second solo recording, The Raven’s Rock.   Cillian also tours Ireland frequently with brothers, Niall and Caoimhim, including performances in Cork City on Ireland’s national “Culture Night.” With Lunasa he has played at the Hollywood Bowl, the Glastonbury and Cambridge Festivals, Womad Adelaide, and the Edmonton Folk Festival, in addition to multiple tours of Asia, Australia, the U.S. and Europe. Lunasa has also performed and recorded with the RTE Concert Orchestra in Dublin.

“Vallely, whose family has played a seminal role in piping and Irish music in the north of Ireland for years, shows why he is one of the most respected pipers playing today.” — Irish Voice

Kevin Crawford was born in Birmingham, England, and lived for many years in Ennis, County Clare. He is an exceptional flute and whistle player. Kevin was awarded the title of Irish Echo Musician of the year in 2000, following the release of his two highly-successful solo albums, “In Good Company” and “D Flute.” In 2012, his third solo CD came out, “Carrying the Tune.” Now a member of Lunasa for over 18 years, Kevin previously made two albums with the acclaimed instrumental band Moving Cloud, 1995’s self-titled album, followed by “Foxglove” in 1998. Other notable album credits from this period include Grianan, Raise the Rafters, Joe Derrane, Sean Tyrrell, and The Sanctuary Sessions. Kevin also tours with Martin Hayes and John Doyle, as the Teetotalers. In September 2014, he produced a new CD for the 100-year old Kilfenora Ceili band. In 2018, Kevin released a CD, “The Drunken Gaugers,” with fiddler Dylan Foley and guitarist Patrick Doocey and a solo release entitled “Carrying the Tune.”

“Kevin is one of Irish music’s premiere air players.” — Folkworks

“Tasty tunes and terrific playing make “On Common Ground” one of the recording triumphs of this year.” – Irish Echo

This is an album that features two guys at the top of their game offering up a stunner, slowly aged to perfection after years together. We love it.” — Chicago Irish-American News