Could it already be ten years since islanders, present and past, came together to celebrate Friday Harbor’s 100th birthday? Although Friday Harbor had been a well-established town since named as the County Seat in 1873, its incorporation date of February 9, 1909 is recognized as its official birthday. And so, The Town of Friday Harbor hosted and coordinated community events galore for its months long Centennial celebration in 2009.
Participating organizations included the San Juan Community Theatre, the San Juan Island Grange, San Juan Island Library, San Juan Island Community Foundation, and the San Juan Historical Society and Museum, to name just a few island event hosts. It was a special day when several members of the Lummi Nation paddled over in canoes for a Centennial recognition ceremony overlooking the harbor.
Pictured here are some of our favorite photos taken during the Centennial events. The photo of three women and the one of three men were both taken at an event called “Elders Speak” in which local historians interviewed some of the island’s most senior elders, in a casual conversation on the sunny deck of the Lakedale Resort lodge.

The fifteen women gathered in the last photo were special guests at a luncheon at Vinny’s Ristorante, hosted by Soroptimist International of Friday Harbor. Each of these special guests represented their island pioneer families. In addition to the family names you see with this photo, other family names represented included Boyce, Egeland, Firth, Guard, Kirk, Mullis, and Rosler — among many others (Readers, please add more family names in the comments, if you wish). Guests were delighted to see photographs of their mothers, grandmothers, and other pioneer relatives as featured in the luncheon table centerpieces.

For more on the history of Friday Harbor, read Images of America: Friday Harbor, authored by Mike and Julia Vouri and the San Juan Historical Society and Museum. It was published for the Centennial year and available at the Library, Historical Museum, and local bookstores.Happy Birthday, Friday Harbor — 110 years young! 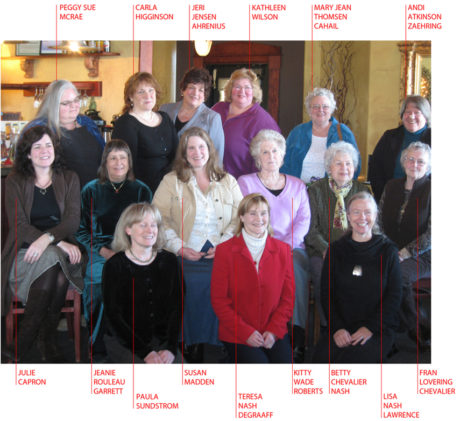