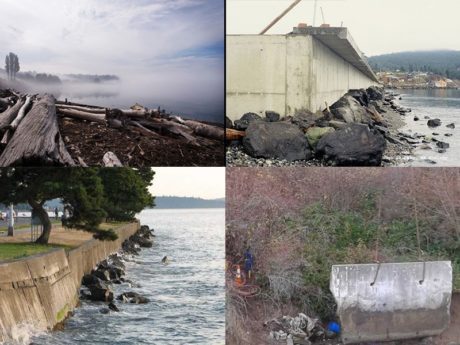 On February 6, a federal judge rejected an effort by the U.S. Army Corps of Engineers (“Corps”) to dismiss a lawsuit challenging its refusal to adequately protect shoreline areas in Puget Sound. The Court’s decision means the lawsuit, which charges that the agency has refused to assert its Clean Water Act jurisdiction over most shoreline armoring in Puget Sound, will go forward.

Sound Action, Washington Environmental Council, and Friends of the San Juans filed the suit in May of 2018. The groups contend a strong federal policy to protect shorelines is critical to Puget Sound recovery and the survival of endangered orcas.

The coalition, represented by the nonprofit environmental law firm Earthjustice, is calling for federal oversight of shoreline armoring by raising what the Corps’ Seattle District considers the “high tide line” to better protect at-risk species and shorelines. The lawsuit also calls for a response to the groups’ 2015 petition asking for jurisdictional decisions on four shoreline armoring projects.

“The Army Corps has been unlawfully limiting its jurisdiction under the Clean Water Act, allowing harmful shoreline armoring projects to move forward without proper oversight here in the Salish Sea. We’re glad to see that the case is moving forward,” said Jennifer Barcelos, attorney at Friends of the San Juans.

“The Army Corps should spend less time filing pointless motions in Court and more time getting on board with the rest of the region in protecting critical shoreline habitat,” said Anna Sewell of Earthjustice, lead attorney for the plaintiffs. “The Corps should stop fighting this lawsuit and start implementing the law so that Puget Sound’s salmon and Southern Resident orcas have a shot at survival.”