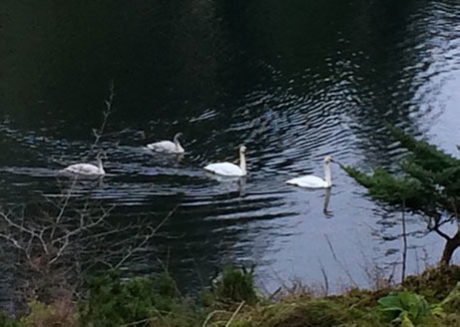 Here’s a note from Kathleen Foley to all the folks who participated in this year’s swan count. Just thought you might like to see it…

Thank you for your participation in the 2019 wintering swan count, held last Friday. Thank you as well, to everyone for returning your count forms to me so quickly, even those of you who came up with nothing on your count (well, no swans anyway)

All told, we had 30+ volunteers who counted 145 trumpeter swans (127 adults + 18 juveniles) on the four ferry serviced islands – slightly down from last year (135 adults + 17 juveniles) – but not a significant decline, and in keeping with the general trend upward in the population.

Also, only 4 swans were found on Orcas (2 adults + 2 juveniles). It’s possible there is a location over there that we are simply missing, OR they were on the move during the count – impossible to know.

However, Orcas residents, if you have seen swans in particular locations and are not sure if they are part of the count, its always worthwhile checking in to make sure we get it covered. It’s notable that almost the same number of swans were found on Lopez and San Juan Island.

Several of you were wondering if we should do the count a bit earlier in January. As this is a regional count (5 other counties participating), I need to coordinate the date with WDFW as they like to have all surveys done within a few days of each other, and typically late January is when they choose.

I took a walk during a brief break in the late morning sunshine out here at Red Mill Farm in the heart of San Juan Valley, and found a noisy flock of trumpeters (28 of them!) in the farm fields. Last Friday, there were none.

Thanks to you all for your help!