Coming Soon to an Island Near You 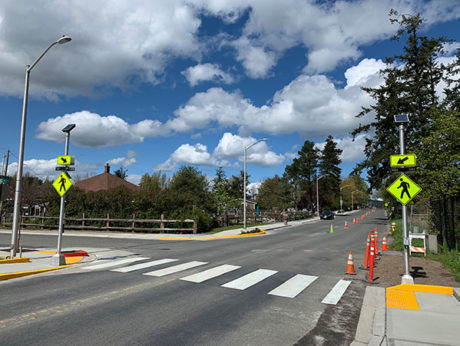 At the San Juan Chamber of Commerce Quarterly Luncheon on Tuesday, in addition to regular chamber business, three speakers announced some things happening around here –

First was County Councilman Bill Watson, some news on things coming up on the island. Next, Friday Harbor Administrator Duncan Wilson announced a few projects in the works for the Town, and finally Brent Snow, General Manager of Roche Harbor Resort shared some new things going on out there.

So first, here’s what Bill Watson had to say – Tomorrow we’ll post what Duncan Wilson said and then on Friday, we’ll have Brent Snow’s report.

Crosswalk to the Fairgrounds
The County and the Town have recently collaborated in creating a safer road crossing at Rose Lane across Argyle Avenue to the fairgrounds. As the town was improving the sidewalk along Argyle between Spruce Street and Rose Lane (remember that 18″ wide sidewalk with mailbox posts and street signs right in the middle of it?), and because the City Limit ends at Rose Lane, the County stepped up to help with the crosswalk on the south side of Rose Lane where it was deemed a safer location for the crosswalk.

The crosswalk is now in, with push-button warning lights that pedestrians can use to alert drivers of the presence of people crossing the road. And the sidewalk is pretty much complete, road striping is about the last thing needed and will happen when weather appropriate.

Shoulders Being Added to Cattle Point Road
The County is also currently widening the shoulders on Cattle Point Road between False Bay Road and American Camp. This is a high traffic road and with increased bicycle traffic during the busy season, it will be a much better experience for bicyclists as well as drivers once this project is complete.

Connector Road
One of the next big projects coming up for the County is the connector road across the old gravel pit from Pear Point Road to Turn Point Road. This should be roughed in and graveled by this fall, but they will miss the requisite weather for chip sealing, so that will happen early in 2020 when temperatures are more allowable.