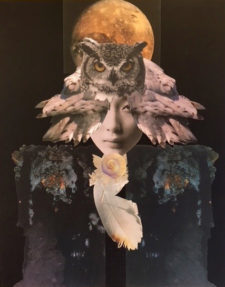 Never Turn Your Back On the Moon – Collage by Thrinley DiMarco

Artist Thrinley DiMarco is offering a collage workshop at the Mullis Center on June 15 and 16.

Says Thrinley, “The mystery and magic of creativity is simply seeing what everyone sees but thinking what no one else has thought. Out of the commonplace images all around, if one looks at them carefully and sensitively, one can create extraordinary images.

Learn to see not merely look. To see means to slow down and pay attention, to be aware.  Bring your ideas and the courage to explore them. The workshop will teach you the tools to express them”

Cubist artists Pablo Picasso and Georges Braque were the first to use the term “collage” from the French word “coller” meaning “to glue” to describe an art form. After taking the picture plane apart they reassembled it with glue, paper, newspaper, sheet music, even wood.

After World War I the dada movement embraced collage as they responded to a world blown apart by literally gluing it back together utilizing mockery and absurdity to critique the European establishment. The Dada Manifesto of 1918 Berlin described the art form, “which is forever trying to collect its limbs after yesterdays crash.” Collage artist Hannah Hoch described her process, “I have always tried to exploit the photograph. I use it like color, or as a poet uses words.”

Next the surrealists used collage to tickle the subconscious with juxtaposed images creating fantastic dreamlike visions. Influenced by the work of Sigmund Freud, they sought a more authentic truth in dreams than from the rational mind.

On this side of the world, Japanese American artist Paul Horiuchi was a master of collage drawing on a traditional Japanese form of torn paper landscape called shikshi. Originally practiced by poets and calligraphers in twelfth century Japan, Horiuchi, a colleague of northwest modern artists Mark Toby and George Tsutakawa, adapted the technique to modern abstraction.

You too can enter the canon of artists working with collage. We live in a time when just about everyone carries a camera phone in their pocket. Madison Ave continues fill our visual landscape with images studied for their potency. Rather than letting these images work on your subconscious why not take hold of the narrative and with scissors and glue create your own vision?