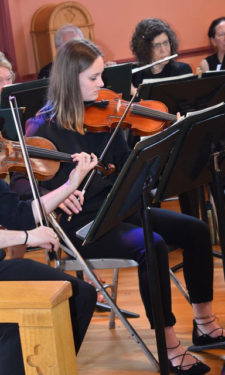 The spring concert series by Island Sinfonia is upon us. On Sunday, May 19, Island Sinfonia will present their annual concert at St. David’s Episcopal Church in Friday Harbor at 3:00 pm. Admission is by donation and students are always free.

This year’s program promises to be extra special, and will feature flautists Linda Stone and Sarah Ogmundson in Quadro by Telemann, and cellist Jen Utter in Mozart’s Ronda alla Turca. Other pieces include the March for the Turkish Ceremony by Lully; the second movement of Rosamunde by Schubert; Libertango by Piazolla, and two pieces for brass ensemble.

This will be the last concert for Island Sinfonia’s only student musician, Natalie Meenan, who graduates from Friday Harbor High School in June. A violinist, Natalie has performed with Island Sinfonia for two years and has been concertmaster this year. In the fall she will attend Bates College in Maine, and plans to study Psychology and Mandarin Chinese.

“I look forward to continuing to grow as a musician. Bates has both a traditional orchestra, and a string band that focuses primarily on fiddle music. Both sound like a lot of fun,” she says.

Natalie began playing violin in second grade while a student at Oregon Episcopal School in Portland, Oregon. “The elementary school had an excellent strings program, both lessons and an orchestra. Both my sister and I enrolled and developed a real love of making music.”

Moving to Friday Harbor in middle school posed a few musical challenges, however. “I’ve been taking lessons with Hanneke (Klein-Robbenhaar), who is fantastic, but there really wasn’t any venue at school for a teenager to play with a group. I tried the high school band one year, but a lone violin doesn’t work very well with band instruments. I’m sure I was an interesting sight in the pep band at the football games,” she laughed.