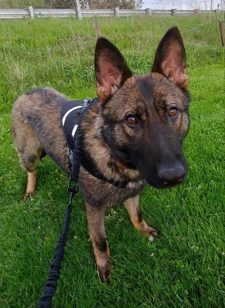 San Juan County Sheriff Ron Krebs recently swore in the newest member of his team. Guss, an 18-month-old sable German shepherd, was welcomed to the Sheriff’s staff this week.

Guss’s handler, Jay Holt, has been a Deputy in the islands for the past year. Holt worked previously with the Burlington Police Department.

Sheriff Krebs indicated the main role for his new K-9 team will be drug detection. “We’re working hard to fight all illegal drug use and trafficking in the islands, and we think the addition of a K-9 unit will help us out significantly in that effort.”

Holt and Guss will be training closely together over the next couple of months. Their education will consist of searches of vehicles, open areas, and buildings among other skills. As Holt highlights, “The training is as much for me as it is for Guss, just learning how he works, and making sure we both understand the right way to operate safely and respectfully in the community.”

Sheriff Krebs added that there is potential to provide additional training for the team on skills such as Alzheimer’s missing person cases and evidence recovery.

“I am excited about working with Guss,” Holt said. “He’s quick to learn and a pleasure to be around. Just a hard working dog and I think we’re both excited to finish our training and get started.”

Krebs added, “We’re going to train this dog to be approachable and friendly. He’ll be a working dog, but also an ambassador to our community and a welcoming face out and about.”

Holt and Sheriff Krebs would like to express their gratitude to the San Juan County Council for funding this addition to the Sheriff’s Office. Says Krebs, “This is something we’ve been looking at for a while now, and we really appreciate the support of the Council to make it happen.”

Guss will reside with Holt as a member of his household.