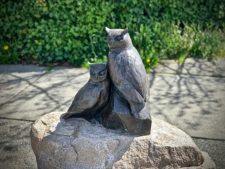 Islanders may recognize the two bronze wildlife sculptures now residing at the corner of Second and West Streets across from Town Hall.

Red Fox (2001) and Paired Owls (2006) by Whidbey Island artist Georgia Gerber had most recently been on display at San Juan Islands Sculpture Park at Roche Harbor. The Friday Harbor Arts Commission (FHAC) selected the pieces for acquisition into the Town’s public art collection. 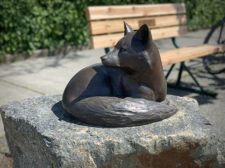 “It’s now a space that people can experience and enjoy rather than simply pass through,” said Mayor Farhad Ghatan. “Our hope is that these sculptures provide an opportunity to feel close to our treasured island wildlife.”

Parks Department employee Sarena Schumacher had asked the FHAC to consider the site for an art installation as it was previously occupied by greenery that struggled to thrive. The commission had been considering options for bringing wildlife art into the town, and they had discussed borrowing or purchasing artwork from the sculpture park.

This site was found to be ideal for both purposes. In addition, the sculpture park offered the pieces to the Town at a discounted price in support of the Town’s efforts to grow their collection and to increase the sculpture park’s profile within town. The artwork was purchased with monies from the Town’s municipal arts and lodging tax funds. In keeping with the design of nearby Breezeway Park, pedestals were created from boulders which were donated by Paula Sundstrom in her father’s memory.

This is the third major public art project for the FHAC which was formed in 2015 to advise the Town Council on the cultivation, selection, acquisition, and placement of public art. Earlier projects include Jake Wagoner’s mural in Sunken Park and Tom Small’s stonework in Breezeway Park. The FHAC is scheduled to install a statue of town founder Edward Warbass on First Street later this year.