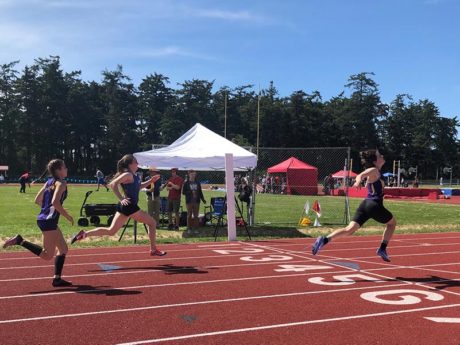 On Saturday, May 18th, FHHS junior, Brianna Hess, captured gold in the Girls 4×100 relay and 200 meter dash 2B Bi-District Championships in improbable fashion.

“On a good morning I’m not much of a morning person,” she said.

But on the morning of the biggest track event of her life she woke up with an upset stomach.  In just her 6th 200 meters race, ever, she found herself facing her biggest opponent: her stomach.

“The hour-long ferry ride followed by a 45-minute long bus ride to Coupeville didn’t help either,” she remembered.

By the time the school bus turned into the parking lot of the Oak Harbor Safeway on Whidbey Island, she thought her body was telling her not to run when it rejected her breakfast of apple sauce and water.

That she was even on a bus headed for the for District Championships in Coupeville and a shot at punching her ticket to the WIAA 2B State Championships was equal parts improbable and remarkable.

Just one year ago, according to Brianna, she was living an unremarkable existence in San Diego.  She was visiting her father and step-mother when they moved to San Juan Island from Issaquah in June of 2018.  She spent many summers visiting the island on boat trips, but from the moment the ferry pulled into the dock in Friday Harbor last June Brianna knew that she’d found her new home.

“She said to me, ‘this feels like home and I don’t ever want to leave’,” remembers her step-mother, Melanie.

And that was just upon seeing her new home on the picturesque seaport hamlet of Friday Harbor.  Once she became ensconced in the FHHS student body life she could feel her entire outlook on life changing.  She says that the school environment is completely different vibe than that of her old school.

The change of scenery lit a fire inside of her.  She didn’t just find a new home – her new home helped her find herself.

“Back in San Diego I was just a number in a school of 3,000 kids,” she said.  “I didn’t feel that I was a part of anything there.  At FHHS I feel completely accepted, open and welcomed.”

And it’s not just the students, she says.  “There is a spirit in this school. It feels like like a real community.”

She was not active, athletically, in San Diego.  In fact, her exercise regime consisted of a 3-mile walk to a friend’s house every now and then.  However, in Friday Harbor she was encouraged to try out for a sport by several people so she settled on track in the winter of 2018-19.

FHHS Track and Field coach, Shannon Plummer, says that he doesn’t instruct kids what events to participate in but instead encourages them to find the events that they want to do.

“I have found that kids compete harder in something that they want to do,” he said.  “I let them choose their events and then I help them make their events their mission.”

Brianna chose the 100 and 200 meters as well as the 4 x 100 meters relay.  She finished in 7th place in her very first 200 meter race but her times continually improved as the season progressed.

Then came Saturday’s bus ride.  After seeing the newcomer’s condition on the bus Plummer made the difficult decision to scratch Hess from her events.  That was followed up by a text from Brianna to her dad letting him know she would not be running which, in turn, triggered a conversation with her step-mom.

“I guess I was a little hard on her,” Melanie said. It was a message of tough love, but it was clear.  “I told her that she had to run or she would regret it forever… that it might be hard, and hard sucks sometimes, but you just have to do it.”

Brianna decided to run when she realized how much her 4 x 100 meter relay teammates were counting on her speed to help them with their team goal of a trip to the state finals.

Then came a return text from her dad.  “He said, ‘Push yourself, you can do this,’” she recalls.

There was some of the pushing that was left to Coach Plummer, as well.  He sought out the senior official to have Brianna reinstated for the 200 meters and the 4 x 100 meters relay.  It probably didn’t hurt that a Coach Plummer whisper could be heard a country mile away.

Brianna thinks that nerves may have contributed to her nausea.  Being a new athlete at a new school she said that she recognized the school names like LaConner and Concrete but not the names of the girls she’d be running against which may have contributed.

“I guess some of my stomach issues may have been butterflies,” Brianna says.

Then she found her own intestinal fortitude when she crouched down on the track and pushed her spikes into the track.  As she pressed her heels onto her starting blocks for the Girls 200 Meters final she began to feel the support from the community being behind her.  By the time the starter’s pistol went off she said that there were no nerves…just freedom.

“I can’t explain it,” she said.  “It was like I was flying.  No opponents.  Just open, blue sky in front of me. I felt completely free.”

The upset stomach turned into a major upset at the finish line as she reeled in the gold with a time of 27.63 seconds trimming over a second off of her personal best.  She earned herself another ferry ride and bus ride, this time to Spokane where she’ll compete in the WIAA 2B State Championships in the 200m against a bunch of kids whose names she doesn’t know.

When it comes to the 200 meters, the wide-open blue skies are the limit. “I have no idea of how fast I can go,” Brianna says.  “But as long as I know that this community has my back I will continue to push myself to my max.”