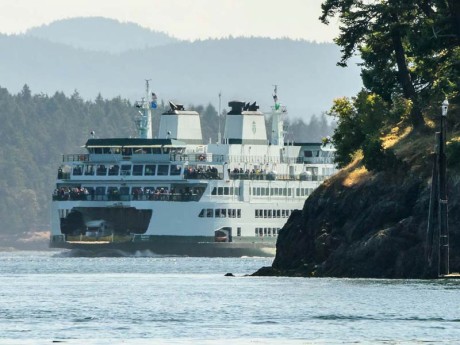 Well here’s some good news, but sadly, not a whole lot… This is the fourth in the 3-part series that became a 4-part series mid-way through.

Part Four: The Solution (to see Parts 1 through 3, click below)

Perhaps “The Solution” isn’t such a good title for this part. Maybe “The Partial Fix” is a better title. But anyway, here’s Jim Corenman again…

The good news is that Samish is back as of June 18, so we are back up to full capacity for the first time in nearly three months… and right before summer schedule starts (which is tomorrow, June 23).

Summer schedule brings one more boat, more capacity and longer dwell-times, so we should be OK with just the usual congestion and late boats on heavy travel days.

And more good news is that the legislature has authorized the building of five new boats to replace the 50-year-old Supers (most of which are on our route) with Olympic (144-car) ferries with hybrid propulsion.

The Olympic Class ferries will be able to operate full-electric where enough power is available at the terminals, diesel where it is not, or any combination. This saves fuel, reduces pollution, and reduces underwater noise which hampers the marine mammals’ ability to find food.

However only the first boat is funded, and it will be probably three years before it is finished. So this is a long-term solution, not a quick fix.

And Jim also has a little more information about the Hyak…

Unfortunately the transportation budget just adopted by the legislature did not include funding to keep the Hyak in service for this next fiscal year. Hyak was originally scheduled to be retired when Suquamish entered service last fall, but was kept in service to cover for warranty work on the other three Olympics. She has been kept busy with other vessels out for unexpected major service as well: Issaquah, Elwha, Sealth, Cathlamet, Elwha again coming up in July– all out for months at a time. However without funding Hyak has to be decommissioned June 30, leaving WSF with 22 boats to cover 19 vessels in summer service.

Thank you Jim – really appreciate your input on this. And I sure hope these things you mentioned will help.

However, as I’m writing this on Friday afternoon, the ferry alerts keep coming in. The most recent says:

So I don’t know what to think.

I’d love to know what you think. Comments are welcome below…