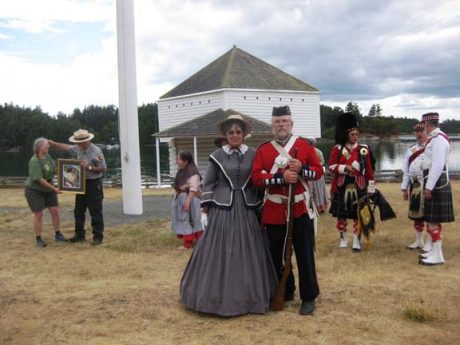 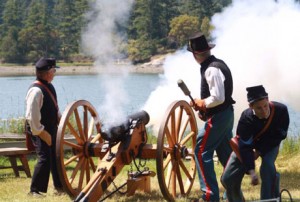 Members of the island’s re-enactment group, Battery D, go through gun drill at English Camp. But it was only ever a drill during the Pig War, the war that never was – the only shot fired was the one that killed the pig.

Re-enactors from throughout the Pacific Northwest and Canada will once again celebrate peace as they gather for the 21st annual Encampment scheduled for July 26-28 on the English Camp parade ground.

Saturday’s schedule will culminate in the Candlelight Ball, schedule at 8pm in the English Camp barracks. The public is invited to join in the dancing and refreshments that will include the traditional cake and punch.

As with every year, Encampment 2019 commemorates the peaceful join occupation of San Juan Island by British and American forces from 1859 to 1872, and final settlement of the Northwest Boundary dispute. Throughout the joint occupation the garrisons exchanged visits to celebrate holidays that include Christmas, the Fourth of July, and Queen Victoria’s birthday. Typically the men would participate in athletic contests, imbibe in spirits and other refreshments and usually host a dance to which the community was invited.